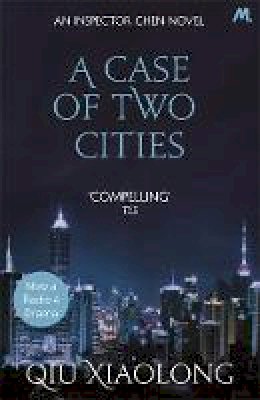 A Case of Two Cities

Description for A Case of Two Cities Paperback. 'As modern China's profile rises, so too does the stock of literature from and about it. But Shanghai-born Qiu Xiaolong's Inspector Chen detective series is one of the freshest and most unpredictable of the lot' Newsweek Series: Inspector Chen Cao. Num Pages: 400 pages, n/a. BIC Classification: FF. Category: (G) General (US: Trade). Dimension: 139 x 200 x 25. Weight in Grams: 288.
Now a BBC Radio 4 Drama Series. Inspector Chen Cao of the Shanghai Police Bureau is summoned by an official of the Party to lead a highly charged corruption investigation. Tentacles have spread through the police force, the civil service, the vice trade and deep into the criminal underworld. The principal figure and his family have long since fled to the United States, beyond the reach of the Chinese government. But the network is still intact and it is only a matter of time before it becomes stronger than before. Chen is charged ... Read more- and it is a job he cannot refuse - with uncovering those responsible, and destroying the organisation from the top down to its roots. In a twisting case that reunites him with his counterpart from the US Marshals service - Inspector Catherine Rohn - Chen must find a measure of justice in a corrupt, expedient world. Show Less

About Qiu Xiaolong
Qiu Xiaolong (pronounced 'Joe Shau-long') was born in Shanghai. The Cultural Revolution began in his last year of elementary school, and out of school, out of job, he studied English by himself in a local park. In 1977, he began his studies at East China Normal University in Shanghai, and then the Chinese Academy of Social ... Read moreScience in Beijing. After graduation, he worked at the Shanghai Academy of Social Sciences as an associate research professor, published poems, translations and criticism, and became a member of the Chinese Writers' Association. In 1988, he came to Washington University in St. Louis, U.S. as a Ford foundation fellow to do a project on Eliot, but after the Tiananmen tragedy of 1989, he decided to stay on. He then obtained a Ph.D. in comparative literature at Washington University and taught there. Having won several awards for his poetry in English, he moved on to write a novel about contemporary Chinese society in transition, which developed into the critically acclaimed, award-winning Inspector Chen series. The series has been translated into sixteen languages. In addition, Qiu Xiaolong has published a poetry collection, several poetry translations, and a collection of linked stories (also serialized in Le Monde). He lives in St. Louis with his wife and daughter. Show Less

Reviews for A Case of Two Cities
Wonderful.
Washington Post
Gripping . . . Chen stands in a class with Martin Cruz Smith's Russian investigator, Arkady Renko, and P.D. James's Scotland Yard inspector, Adam Dalgliesh.
Publishers Weekly
Qiu Xiaolong is one of the brightest stars in the firmament of modern literary crime fiction. His Inspector Chen mysteries dazzle as they entertain, combining crime ... Read morewith Chinese philosophy, poetry and food, Triad gangsters and corrupt officials.
Canberra Times, Australia
A vivid portrait of modern Chinese society . . . full of the sights, sounds and smells of Shanghai . . . A work of real distinction.
Wall Street Journal
The usual enjoyable mix of murder, poetry and contradictions of contemporary Chinese culture. Chen is a splendid creation.
Independent on Sunday
The first police whodunnit written by a Chinese author in English and set in contemporary China . . . its quality matches its novelty.
The Times
With strong and subtle characterisation, Qiu Xiaolong draws us into a fascinating world where the greatest mystery revealed is the mystery of present-day China itself.
John Harvey Chen is a great creation, an honourable man in a world full of deception and treachery.
Guardian
Atmospheric and rich in behind the scenes detail . . . Morse of the Far East.
Independent
Xiaolong's astute rendering of the many contradictions of contemporary Chinese life centres on the brilliant Inspector Chen . . . A series that might well get you hooked.
Sunday Telegraph
A fresh, fast-paced detective thriller that will keep you turning those pages.
Sunday Express
Compelling . . . this fast-moving crime novel admirably depicts the intriguing struggles of characters grasping a foothold in a new and rising China.
Times Literary Supplement
Show Less

Goodreads reviews for A Case of Two Cities