Home » Fiction » Romance » My Lord and Spymaster: Spymaster 3
22%OFF 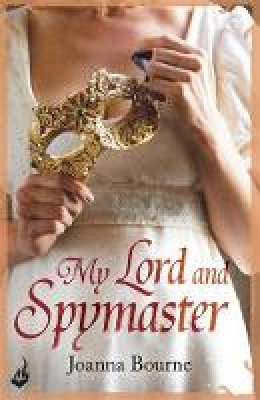 My Lord and Spymaster: Spymaster 3

Description for My Lord and Spymaster: Spymaster 3 Paperback. The third enthralling novel in the Spymaster series. Historical romance steeped in loyalty and love against the backdrop of civil war and a cultural enlightenment; Joanna Bourne consistently delivers sweeping, thrilling romance. Series: Spymaster. Num Pages: 336 pages. BIC Classification: FRH. Category: (G) General (US: Trade). Dimension: 129 x 197 x 20. Weight in Grams: 252.
Joanna Bourne returns to the French Revolution, pairing espionage and burning romance to create an unforgettable love story. For fans of Stephanie Laurens, Elizabeth Hoyt and Poldark, this is a must-read. A daring beauty, she's infamous for taking chances... Now she'll risk everything for love. Raised as a poor but cunning pickpocket, Jess Whitby has grown into a wealthy young woman. But when her father is wrongly accused of selling secrets to Napoleon, she must rely on her guile to save him. She never dreamed her search for the real traitor would begin by ... Read morewaking up naked in a captain's bed. Or how little she'd mind... Captain Sebastian Kennett finds himself infatuated with the courageous spirit of the kidnap victim he saves. She's equally enthralled by his commanding strength - until she discovers that this spellbinding seaman could be traitor she's hunting, and the man to determine her both her father's fate and her future too. For more spellbinding Spymasters romance, look for the other titles by Joanna Bourne: The Forbidden Rose, The Spymaster's Lady, The Black Hawk and Rogue Spy. Show Less

About Bourne, Joanna
Joanna Bourne has always loved reading and writing romance. She's drawn to Revolutionary and Napoleonic France and Regency England because, as she puts it, 'It was a time of love and sacrifice, daring deeds, clashing ideals, and really cool clothing.' She's lived in seven different countries, including England and France, the settings of the Spymaster series. ... Read more Joanna now lives on a mountaintop in the Appalachians with her family, a peculiar cat, and an old brown country dog. Visit her online at www.joannabourne.com, and connect with her via @jobourne, www.facebook.com/joanna.bourne.5, or www.jobourne.blogspot.co.uk. Show Less

Goodreads reviews for My Lord and Spymaster: Spymaster 3