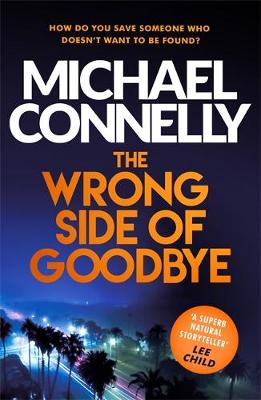 The Wrong Side of Goodbye (Harry Bosch Series)

Description for The Wrong Side of Goodbye (Harry Bosch Series) Paperback. Harry Bosch is back with a fast-paced, action-packed, gripping new thriller from global bestseller Michael Connelly. Series: Harry Bosch Series. Num Pages: 448 pages. BIC Classification: FF. Category: (G) General (US: Trade). Dimension: 198 x 129. .
Only Harry Bosch can uncover LA's darkest secrets in this new gripping thriller from global bestseller Michael Connelly. 'What do you want me to do?' Bosch asked again. 'I want you to find someone for me,' Vance said. 'Someone who might not have ever existed.' Harry Bosch is working as a part-time detective in the town of San Fernando outside of Los Angeles, when he gets the invitation to meet with the ageing aviation billionaire Whitney Vance. When he was eighteen Vance had a relationship with a Mexican girl called Vibiana ... Read moreDuarte, but soon after becoming pregnant she disappeared. Now, as he reaches the end of his life, Vance wants to know what happened to Vibiana and whether there is an heir to his vast fortune. And Bosch is the only person he trusts to undertake the assignment. Harry's aware that with such sums of money involved, this could be a dangerous undertaking - not just for himself, but for the person he's looking for - but as he begins to uncover Vibiana's tragic story, and finds uncanny links to his own past, he knows he cannot rest until he finds the truth. Show Less

About Connelly, Michael
A former police reporter for the Los Angeles Times, Michael Connelly is the internationally bestselling author of the Harry Bosch series, and several other bestsellers including the highly acclaimed legal thriller, The Lincoln Lawyer. The TV series - Bosch - is one of the most watched original series on Amazon Prime and is now in its fourth season. He has ... Read morebeen President of the Mystery Writers of America, and his books have been translated into thirty-nine languages. His writing has won awards all over the world, including the Edgar and Anthony Awards, and, most recently, the CWA Diamond Dagger 2018, the highest honour in British crime writing. He spends his time in California and Florida. To find out more, visit Michael's website or follow him on Twitter of Facebook. www.michaelconnelly.com f/MichaelConnellyBooks t@Connellybooks Show Less

Reviews for The Wrong Side of Goodbye (Harry Bosch Series)
Promises more very good things... A novel to keep, not throw away
THE TIMES
Harry Bosch is one of American crime fiction's great detectives
IRISH TIMES
Immensely satisfying.... A compelling homage to Raymond Chandler's Philip Marlowe and Los Angeles
DAILY MAIL
Thriller of the Week
MAIL ON SUNDAY, EVENT
This is storytelling ... Read moreat its best from one of America's greatest living crime writers
DAILY EXPRESS
Show Less

Goodreads reviews for The Wrong Side of Goodbye (Harry Bosch Series)