Home » Sport » The Pride of the Yankees: Lou Gehrig, Gary Cooper, and the Making of a Classic
31%OFF 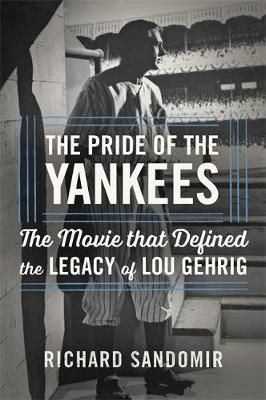 The Pride of the Yankees: Lou Gehrig, Gary Cooper, and the Making of a Classic

Description for The Pride of the Yankees: Lou Gehrig, Gary Cooper, and the Making of a Classic Hardcover. Timed to the 75th anniversary of the beloved classic Pride of the Yankees, New York Times columnist Richard Sandomir takes a look back at the making of a seminal sports film featuring one of Hollywood's greatest leading men, Gary Cooper Num Pages: 256 pages. BIC Classification: APF; WSJT. Category: (G) General (US: Trade). Dimension: 240 x 156. .
On July 4, 1939, Gehrig delivered what has been called baseball's Gettysburg Address at Yankee Stadium. There is, for now, no known, intact film of Gehrig's speech, but instead, just a swatch of the newsreel footage has survived, incorporating his opening and closing remarks: For the past two weeks you have been reading about the bad break I got. Yet today I consider myself the luckiest man on the face of this earth, the last line, of course, having become one of the most famous, invoked, and inspiring, ever, anywhere. The New York Times account, the ... Read morefollowing day, called it one of the most touching scenes ever witnessed on a ball field , that made even hard-boiled reporters swallow hard. The scene and the story would likely have been largely lost to history, altogether, were it not for the film, Pride of the Yankees, best known for Gary Cooper, as the dying Lou Gehrig, movingly describing himself as the luckiest man on the face of the earth, even as his body was being ravaged by the disease that was soon named after him. Here, now, in Pride of the Yankees and the Legend of Lou Gehrig by Richard Sandomir, New York Times sports columnist, is, for the first time, the full story behind the pioneering, seminal movie. Filled with larger than life characters and unexpected facts, Pride of the Yankees shows us how Samuel Goldwyn had no desire to making a baseball film but he was persuaded to make a quick deal with Lou's widow, Eleanor, not long after Gehrig had passed; Hollywood icon Cooper had zero knowledge of baseball and had to be taught to play; unknown parts of the screen treatment and screenplay that will be written about for the first time; and dishy letters to Eleanor from Christy Walsh, the pioneering business manager who represented the Gehrigs, from the Los Angeles set. Nostalgic, breezy and fun, Pride of the Yankees captures a lost time in film and sports history. Show Less

About Sandomir, Richard
Richard Sandomir has been the award-winning sports media and sports business writer for the New York Times since 1991.He is the author or co-author of several books including Bald Like Me, and, most recently, The Enlightened Bracketologist, and its sequel, The Final Four of Everything.

Reviews for The Pride of the Yankees: Lou Gehrig, Gary Cooper, and the Making of a Classic
An affectionate look at the making of the 1942 baseball biopic Pride of the Yankees, the rarest of movies
an American icon played by an American icon.
Milwaukee Journal Sentinel It wouldn't be much of a stretch to call Sandomir's book as much of a classic as the movie that inspired it.
Minneapolis Star-Tribune New York Times sports columnist ... Read moreRichard Sandomir reveals for the first time the full story behind the pioneering, seminal movie. Filled with larger than life characters and unexpected facts, the book shows us how Samuel Goldwyn had no desire to make a baseball film but he was persuaded to make a quick deal with Lou's widow, Eleanor, not long after Gehrig had passed. A great book if you want to know, in the immortal words of the late Paul Harvey, 'the rest of the story.'
Forbes.com The fascinating inside story of the 75-year-old film....Even if you've seen the movie 100 times, this book will give you a different perspective.
The Chicago Tribune An authoritative take on what's factual (not that much), what's fanciful (a whole lot) and what's a bit of both....fans of film and baseball will appreciate Sandomir's book.
The Associated Press This book is so enjoyable that one day there will be a book about the making of the book that told the story of the making of the movie.
Marty Appel, former public relations director for the New York Yankees and author of Pinstripe Empire: The New York Yankees from Before the Babe to After the Boss Sandomir has written a great book about a movie and a man who has inspired millions. Timed to the 75th anniversary of the film's release, it would make an excellent Father's Day gift.
Sporting News If you grew up with The Pride of the Yankees as a yearly staple on Ch. 11
or just watch it now whenever it pops up on MLB Network
you must read Richard Sandomir's book of the same name on the making of that wonderful movie....You'll be done - and ready to watch the movie all over again
Mike Vaccaro, New York Post In this emotional and fascinating tale, Sandomir brilliantly captures the spirit of the film and Gehrig's life. Film lovers and baseball fans will enjoy.
Library Journal Sandomir spotlights a significant moment in baseball history and solidifies Gehrig for a new generation of Yankees fans.
ESPN.com How was Lou Gehrig's timeless story brought to the Big Screen? Richard Sandomir answers that question with deft precision and warmth.
Tim McCarver, former MLB catcher and announcer for the St. Louis Cardinals Intriguing...a must for movie and baseball buffs...Sandomir mines a rich vein of lustrous personalities.
The New York Times Richard Sandomir was as well cast to write this book as Gary Cooper was to play the great Gehrig. Baseball fans and movie lovers will devour this book.
David Maraniss, author of When Pride Still Mattered and Clemente Think you know all there is to know about Lou Gehrig and the movie that so movingly tells his tragic story? Think again. In this fascinating new book, the great Richard Sandomir takes us inside the making of The Pride of the Yankees while also delivering rich new detail about Gehrig's short life. It's a cliche to say this book is a home run, but it's true. It is.
Christine Brennan, USA Today sports columnist and ABC News, CNN, and NPR commentator There are very few great movies about sports, but after more than seventy years The Pride of the Yankees remains at the top of the roster because it focuses on the pride and grace that sports, at their best, display. As Richard Sandomir's fascinating book shows, this beautiful movie emerged simply because Samuel Goldwyn needed a vehicle for Gary Cooper, whose gift for quiet anguish made Lou Gehrig immortal. It's an irresistible story.
Scott Eyman, New York Times bestselling author of John Wayne: Life and Legend The riveting story behind the making of The Pride of the Yankees is finally being told in Richard Sandomir's meticulously researched and gracefully written book. He brings to vivid life Eleanor Gehrig, Gary Cooper, and Samuel Goldwyn's efforts to turn a hero's life into a heartfelt film.
Gay Talese When it comes to the confluence of sports, business and culture, nobody hits and fields like Rich Sandomir, an all-star, maybe even an Iron Horse.
Robert Lipsyte, author of An Accidental Sportswriter Packed with fascinating new detail, The Pride of the Yankees will be the delight of baseball fans and movie buffs. Think of it as a triple play: great ballplayer, great movie, great book.
Jonathan Eig, author of Luckiest Man: The Life and Death of Lou Gehrig More than the story of a movie or even an era of baseball, Richard Sandomir's brilliantly reported book transports us back to an age of real heroes who had both grit and elegance. In doing so, he issues a valuable challenge to today's stars: character matters.
James Andrew Miller, bestselling author of Those Guys Have All the Fun: Inside the World of ESPN The brave, tragic story of Lou Gehrig, the great baseball player, was a script waiting to be written. With affection and reportorial savvy, Richard Sandomir describes how one myth begat another to produce the legendary baseball movie that still can make people cry. The Pride of the Yankees recalls a lost world, when Hollywood had the power to create dreams that people wanted to believe.
Julie Salamon, author of The Devil's Candy and Wendy and the Lost Boys Show Less

Goodreads reviews for The Pride of the Yankees: Lou Gehrig, Gary Cooper, and the Making of a Classic