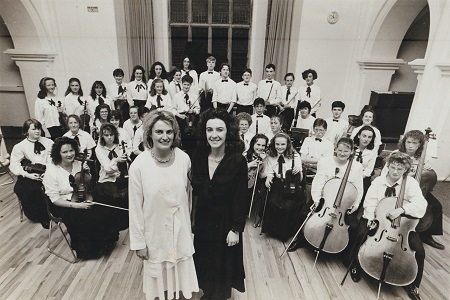 Years ago, there was neither an independent community orchestra nor a musical instrument teaching system in Galway city or county. A handful of schools, mostly run by religious orders, taught a small range of instruments and would put a small orchestra together for their annual school show or operetta, their music teachers being very influential in passing on a love of music to their pupils.

Then one of these teachers, Máire Ní Dhuibhir McLoughlin, a former pupil of Seán Ó Riada’s, proposed the setting up of a county orchestra to bring together musicians from all over the county. So, in 1982, she brought together pupils from Spiddal, Loughrea, Tuam, Salerno and the Jes to form the first Galway Youth Orchestra. Just getting them together was an achievement back then. Members gathered on an occasional basis to rehearse and their first public performance was in Park Lodge in Spiddal on January 6th, 1983. Their inaugural concert was in the Great Southern Hotel on May 5th of that year.

The venue was packed for this concert, the 72 members of the orchestra delighted the audience with the strains of Offenbach’s Barcarolle, 12-year old Heather Clarke from Eyrecourt joined them on her uileann pipes to perform ‘Seán Ó Duibhir an Ghleanna’ and the talent of the group was fully displayed with their playing of three Morris dances.

It was quickly obvious that a lack of trained teachers of orchestral instruments was a serious drawback so an approach was made to the Limerick School of Music resulting in a number of teachers coming on a weekly basis for classes which were held in Coláiste Éinde. In 1985, the City of Galway VEC incorporated the GYO classes into the VEC music education scheme which ran in GTI. A wide range of instruments were taught there.

Making a child part of an orchestra is a great gift, they learn so much from being inside that large wonderful instrument. They learn to interact and communicate with other people as part of a team or an audience. They learn about posture, presentation, pressure and performance, they learn responsibility and respect for others. Some learn to lead, others learn to follow. All learn to listen.

GYO have significant achievements to their credit, they have played in many locations in County Galway and throughout Ireland and have toured to Prague, Paris, Lorrient and Wolfthausen in Germany.

On this Saturday evening, April 30th 2022, the orchestra will present their first post-covid concert, their first in their anniversary year, in St. Nicholas Collegiate Church at 7pm. Tickets are available at the door and patrons are welcome to come early to have a cup of tea or coffee before the performance.