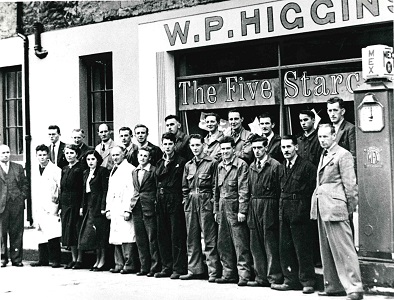 In 1912, WP Higgins, working from his base in Athenry, went to Cork city to meet Henry Ford to ask him for the Ford dealership. It marked the start of a great business partnership between a business legend and Higgins' Garage.

Meanwhile, in Galway, Bertie Simmons had owned and operated a garage in a little alley off William Street called The Corrib Motor and Engineering Works. Bertie was a mechanical engineer and he painted a Model T silver with a red cross on each door and drove this ambulance to France to support the Allies' cause. While he was in France, his father, a photographer, tried to manage the business but it declined and it was decided to sell it. WP Higgins bought the garage and all the tools and lathes for £100 in 1917 and so was able to move his Ford dealership into town.

Before the advent of petrol pumps, petrol was supplied in two-gallon tins or in 25-gallon drums which were stored in Corbett’s yard. Higgins had nine staff and when, eventually, he wanted to install one of the first petrol pumps in Galway on William Street, there were serious protests from locals and businesses alike who thought that he was going ‘to blow up Galway’. Happily, there were never any serious incidents at this pump.

He had a major advantage on other dealers as Ford cars and trucks were the only ones built in Ireland at the time, and his business began to grow so he purchased the site of the old Victoria Theatre and the adjoining Moylett’s Yard in Victoria Place, renovated and modernised the building and relocated the business there in 1934. It was the first in Galway to have a showroom, a large parts department, and a large workshop.

As an additional money earner, he opened the Astaire Ballroom on an upper floor of the building. It had a maple sprung dance floor and became a very popular venue.

In 1947, WP Higgins was coming under pressure from Ford to modernise and upgrade his long-standing business. He fought against this for a while and then decided to retire and hand over his shareholding to his nephew, Paddy Higgins. It was agreed with Ford that Paddy would go into partnership with a Ford employee, Tom St John Barry. Tom later became a director, and in 1959 took complete control of the business. At that time, there were 39 employees, many of whom had worked there for years, people such as Ned Maguire, Willy McCumiskey, John Devaney, Peter Maloney, Paddy Concannon, and Paddy Wade.

The business was still expanding and in 1962, they transferred to a new premises that was designed in conjunction with the technical department of Ford. It was situated on the Headford Road which, at the time, was all bog land and was regarded by many Galwegians as being ‘out in the country’. In 1964, Tom Barry’s son Michael joined the business and in 1977, his brother Kevin joined. In 1982, it became the first garage in Ireland to install a fully integrated computer system. Tom Barry died in that same year.

In 1990 they moved again, this time to Motorpark, a specially designed 60,000 square foot development further out the Headford Road, a totally new concept encompassing all the company’s dealerships, Ford, BMW, Mitsubishi, and Honda all under one roof, Ireland’s first multi-franchise dealership. In 2012, Higgins’ Motorpark celebrated 100 years of Ford in Galway.

In recent years, the business was taken over by Shiel Motor Group.

Our thanks to Kevin Barry for all of his help with the above.