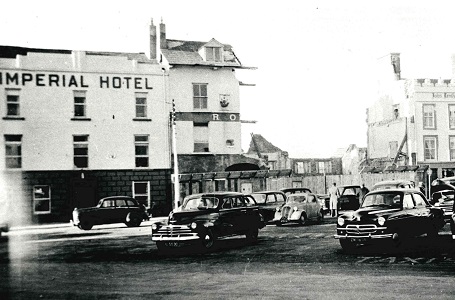 The expansion of the Woolworth chain in Ireland in the early 1950’s proceeded smoothly except in one location, Galway. A number of city councillors, supported by some local retailers were against bring new business into town. Eventually, Woolworths purchased the site of the old Royal Hotel in the Square. The hotel was demolished and a brand new purpose built retail store in its place. When they advertised for staff, more than 500 girls applied. Officials of the firm were very taken aback and it took several days to complete the interviews. The weekly wage offered to the girls, £4 7s 6d was very good for the time. About fifty people were initially employed.

Excitement was building as the day of the opening approached. When the doors opened on the morning of July 14th 1953, queues had already formed outside the door. This was essentially the first pound shop in Galway. It was a very extensive premises which got wider as one went to the back where there was an exit that brought you out near the Savoy. It was open plan with counters arranged in a series of squares. These were covered in tiered displays of goods which made them appear a little higher than your average counter.

Down towards the back, they sold kitchenware, household goods and drapery, haberdashery and pharmaceuticals.  There was a garden section along the left wall where you could pick from a large selection of bulbs and packets of seeds. There was a hardware section where they sold (unusually for the time) plastic wallets of screwdrivers amongst other things.

Around the corner towards the back on the right was the first photographic booth in town where you got four passport sized photographs for a half dollar and you could make an eejit of yourself in the process behind the curtain because nobody was looking.

Towards the centre of the shop, you could buy stationery and cigarette lighters and then there was the big display of dinky cars and trucks, of toy soldiers and cowboys and Indians and forts and castles and things. The special ‘atmosphere’ of the shop hit you as you came in the door because it was there, at the front that the delicious smells and aromas of the sweets assaulted you. They were laid out on those front counters, piles of marshmallows, liquorice allsorts and creamy toffees, mostly selling for 7d per quarter pound, not in jars, not in tins, not in boxes, but out in the open for all to see and to smell. For children, it was cruel, like forbidden fruit, all that temptation, and when you were so close, it was very tempting. All of the girls serving sweets wore white uniforms. 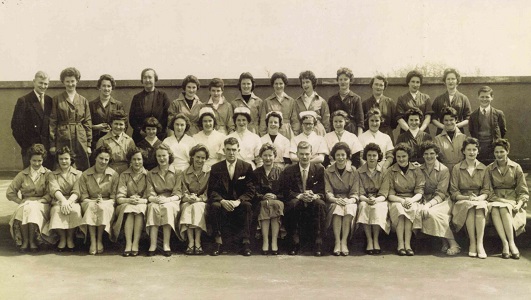 And as if that was not enough, there was a machine near the right hand door that produced the most beautiful ice cream cornets with twirls on top, and then the machine that kept the salted peanuts warm, more seductive smells. Even the system for taking cash was different, it was placed in a metal cylinder and shot through a series of tubes to a central office, shortly to return with your change and receipt. No wonder it was popular, it became a place for teenagers to hang out. In 1984, the company decided to sell of all of its Irish shops and sadly “Woolies” closed down in the Square. The closure was not without dispute.

The first of our images today shows the Royal Hotel being demolished to make way for the new building. Our second shows the staff in 1959.

This photograph was taken on the roof of the building. It was a Race day, therefore half day, so all of the staff finished work, posed here, and then went off to the taces.

Woolworths was where Supermac’s is today.