THE RIC IN GALWAY 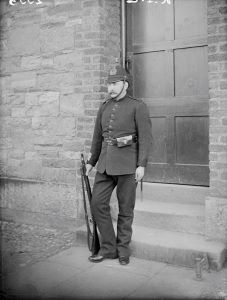 In the 18th century, attempts at maintaining Law and Order in Galway were poor. Occasional groups of civilian vigilantes were set up, but they were not very successful. Then, 200 years ago, in 1822, the Chief Secretary Henry Goulburn set up the Irish Constabulary. In 1824, Edward Blake from Mary Street became the first Catholic in Ireland to become a constable. In 1825, a decision was made to bring police to Galway. Some time later a barracks was set up in Abbeygate St., then one in Eyre Square (where Giblin’s Hotel was situated later) and one in Dominick St. where An Tobar Nua is today. The force gradually became very organized, were successful in dealing with crime and so Queen Victoria granted them the term ‘Royal’.

As some of these premises gradually fell into bad condition, it was decided to build a headquarters in the city for the force, so a site was cleared on Lion’s Tower Avenue, the trees were cut down and the barracks was built on what we know today as Eglinton St. It opened in 1886 and could accommodate 46 policemen with each officer given a kitchen, pantry, scullery, bathroom, parlour, drawing room and bedrooms. The constables had bedrooms and shared a large kitchen, a day room & a dining room. Included were offices on the top floor, strong holding cells and stables, a coach house and a ball alley at the rear. By the end of the century, there were barracks situated off Lenaboy Avenue in Salthill and one next to the house where Pádraic Ó Conaire was born on New Docks Street.

In 1909, the County Inspectors were R.G. Flower and D.I. Mercier. The head constable in Dominick St. was T. Killackey, he had 6 constables: Sergeant Walker was in charge of 4 constables in New Docks and Sergeant John Lynch had 4 constables in Salthill.

In spite of occasional dangers the RIC was seen as an attractive source of employment for young men but as time moved into the 20th century, relationships between the force and nationalists began to deteriorate. As more and more republican prisoners were incarcerated, Eglinton Street Barracks was seen more as a symbol of British occupation than as a place of law enforcement. Constables were seen as legitimate targets and the number of attacks on them increased.

After the truce, when the British were leaving, the RIC barracks were being handed over and the policemen began to go home. Many of these men were attacked about this time, the worst atrocity occurring in St. Bride’s on Sea Road in March 1922 when three ex-RIC men and a civilian were shot as they lay in their beds. Sergeants John Gilmartin and Tobias Gibbons were killed as was the civilian John Cassidy. Constable Eugene McGloin was injured.

Our photographs today are of a typical RIC man and of the last RIC group at Eglinton Street before they handed over control of the barracks. 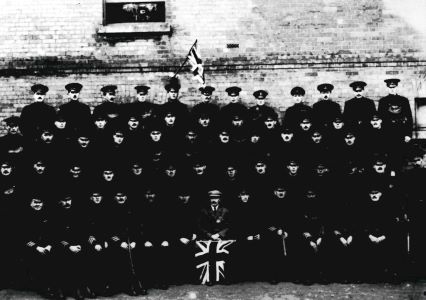