DRUID, THE EXPRESSION OF IMAGINATION 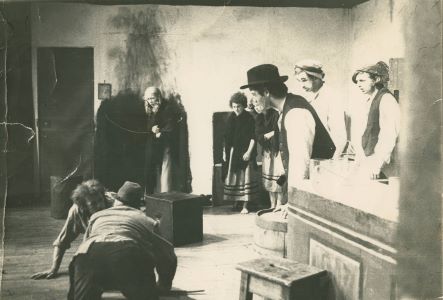 It is hard to believe that it was 46 years ago this week that Druid Theatre first tread the boards. The location was the Jesuit Hall and the play was The Playboy of the Western World. The following night, they put on It’s a two foot six inches above the Ground World  by Kevin Laffan and on the third night, it was The Loves of Cass Maguire  by Brian Friel.

That summer was one of the hottest in years so it took real energy and dedication to rehearse three plays a day, one in the morning, one in the afternoon and one at night. Happily, the audience response was good, helped by members of the group selling tickets on Shop Street for each performance. The hall was being used for exercise sessions during the day so the seats had to be laid out before each performance, and tidied away afterwards.

Not content with all that work, they started, within two months, to produce lunchtime theatre in the Fo’castle, a space behind the Coachman Hotel in Dominick Street. This involved carrying lights, drapes and other props to and from the Jesuit Hall every day. Their next big production was The Glass Menagerie which they had to rehearse between 11pm at night and 6am because the hall was unavailable during the day.

Their dedication was paying off, they were creating an audience. They leased the Fo’castle and converted it to a 47-seat theatre and continued, through hard times and good times, to put on plays. In 1978, they negotiated with McDonoughs and took over an old warehouse of theirs on Courthouse Lane. The actors became carpenters and plumbers and plasterers as they worked on transforming this building. In May, 1979, they formally opened it as their new theatre with The Threepenny Opera by Brecht. This exciting development created Irish theatre history but it was also an important factor in the changes that were going on in the streets around, old buildings being reclaimed, new businesses opening and a whole different energy being injected into the area.

Druid had by now shattered the notion that professional theatre could not be made outside Dublin. They broke the mould. That spirit of adventure they started off with stayed with them as the put on adventurous productions, toured the country, played on big stages all over the world, encouraged new writers, re-established old reputations, started many acting careers. To this day, in spite of all the acclaim, that spirit is still evident, there is a freshness in the company, a spontaneity, a willingness to push out the boundaries while always maintaining very high standards.

Our photograph which was taken by Dave McGrath is of their very first produciion of The Playboy and includes Mick Lally, Gerry King, Marie Mullen, Garry Hynes, Mary Ryan, Martin Coffey and Adrian Taheny.

One of the very significant milestones in the history of this group was the arrangement made between them and the company Thomas McDonough which gave them their own theatre. This extraordinary act of generosity was orchestrated by the then Managing Director of the company, Donagh O’Donoghue, who, not content with handing over the building, went on to join the board of Druid and use his business experience in helping  influence many of their decisions. He, like many of the Druids, had been a member of Dramsoc in U.C.G. and in recent years, in a wonderful act of philanthropy, he funded what is now known as the O’Donoghue Centre for Drama, Theatre and Performance in UCG which includes a 120-seat theatre, studio spaces, workshops etc. and will undoubtedly be a symbol of belief in the future of drama productions in this country. Donough passed away recently and we mourn his loss, but we will always remember him for the extraordinary cultural legacy he has left this city.