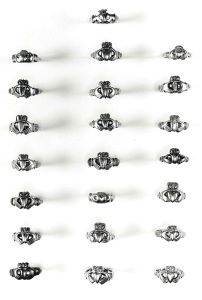 The story of the Claddagh Ring, which is made up of a plain hoop attached to a hammered or cast bezel designed as two hands clasping a crowned heart, has so much folklore and myth attached to it that it is hard to know where legend ends and truth begins. The motif of clasped hands is usually referred to as a ‘fede’ or ‘hands in faith’ ring and has been used on love rings since Roman times. The heart, regarded by lovers as the seal of affection, made an appearance on rings at a later date as did the crown which is the distinguishing feature of the Claddagh Ring from all the others.

The earliest extant Claddagh rings date to about the year 1700. A number of these have the maker’s initials R.I. engraved, exactly the initials attributed to Richard Joyce of Galway. Joyce made a number of pieces of silver for the Dominican Convent in Galway which can be dated from 1715, and he may have got the inspiration for the Claddagh Ring while working for a goldsmith in Algiers.  But why did Joyce add a crown to the ring? Could it be that it was regarded as a symbol of perfection, or that the Claddagh had elected its own king from time immemorial?

Probably due to economic and social circumstances, there are very few surviving rings from that period up until about 1770. It seems that interest in these rings became dormant after Richard Joyce ended his manufacturing career in the 1730’s. It was revived by George Robinson a generation later and from then on a number of Galway goldsmiths made the rings – up to the 1840’s when the manufacture became commercialised.

It was not until the mid-nineteenth century that this type of ring became known as a ‘Claddagh Ring’, probably after Mr. & Mrs. Hall published a three volume description of Ireland in which they wrote … “The people of the Claddagh have many peculiar customs. One is worthy of special note. The wedding ring is an heirloom in the family. It is regularly transferred by a mother to her daughter first married and so on to their descendants. These rings are largely of solid gold, and not infrequently cost from two to three pounds each”. This description was repeated in many other books and articles.

It was assumed that these rings were “solid gold” but recent assaying of a number of them for fineness showed that they could vary from 18 carats to 6. This may have been because the Galway makers did not have to send their rings to Dublin for hall-marking, so the poor fisherman of the Claddagh, to whom £3 was an absolute fortune, could tell the goldsmith how much he could afford to pay, and this in turn would have fixed the caratage. In other words, poverty dictated the fineness of the gold.

Tomorrow afternoon (Friday, 25th of February) at 3pm, The Galway Poetry Trail will unveil a beautiful new poem entitled "Claddagh Ring" by Dublin poet Nessa O'Mahony. The poem will be on the wall of the oldest jewellers in Ireland, Dillons, whose shop is on the corner of Cross Street and Quay Street. Dillons, the oldest jewellers in Ireland, started business in 1750 and have permission from the Assay Office to stamp 'Original' on their rings. Nessa's poem has been carved on slate by Daithí O'Gorman and will be unveiled by Mary O'Malley. All are welcome to attend.

Our photograph shows a variety of Claddagh rings dating from c.1700 to 1900 and was kindly given to us by the National Museum.