The Seven Wonders of Galway 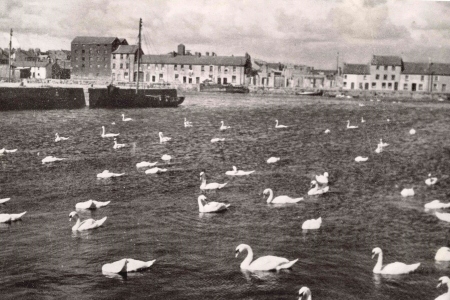 I was asked a question some time ago that stopped me in my tracks, “What, for you, would be the seven wonders of Galway”? It made me think long and hard and I decided to draw up a list.

It might be the sunrise on the bay on December mornings, the sunset on the bay on November evenings, the atmosphere on the streets, hearing Irish spoken on the streets, Druid, An Taidhbhearc, The Pádraic Ó Conaire statue, the tower at Blackrock, the Saturday market, the River Walk, Lynch’s Castle, The Arts Festival, Galway Oysters, the Garden of Remembrance, Cúirt and so on. All of these are important to me, a source of joy to me, parts of the fabric that make up this city I am proud to live in.

So I narrowed my list down to seven (with four illustrated) and here they are, in no particular order….

THE SWANS AT THE CLADDAGH
There is a wonderful nobility and elegance about the herd of swans that congregate at the Claddagh. They are beautiful mute swans, pure white with an orange bill, and because they are constantly fed by the public, they are tame. We are asked not to feed them stale mouldy bread which can kill them, or white bread which contains no nutrition and is indigestible for them. These birds are one of the sights of Galway, especially when they have their young with them.

ST NICHOLAS’ COLLEGIATE CHURCH
This venerable building which will celebrate 700 years of continuous worship in 2020 is in the heart of the city. Its history is a microcosm of Galway history. Built by the Knights Templars, supported by the Tribes of Galway, the Merchant Princes, visited by Columbus, Cromwell, General Ginkel, Famine victims, various British Army Regiments, lepers, not to mention millions of worshippers. It alternated between Catholic and Protestant several times and today is Church of Ireland but could be described as ecumenical. You are touching Galway history when you visit this iconic building.

THE MACNAS PARADE
This riot of imagination, colour, energy, enthusiasm, music, throbbing drums, fire, dance, noise, mayhem is an annual highlight that manages to involve most of the population of the city. Crowd participation is key to the air of abandon that infects the Galway parade. Tom Ginty who was better known as ‘The Diceman’ once described it thus “It was as if a giant spell came down and spread itself over Galway and made everybody happy for the day”.

THE PROMENADE
From the Claddagh to the end of the Golf Club, this coastal walkway has been a source of pleasure and healthy exercise for millions of people. It was originally built in late 19th century and has been gradually extended since, and hopefully will be again soon. You will meet every size, shape and age of person here, walkers, runners, joggers, crawlers, tall people, small people, thin ones, fat ones, one with duck’s disease, people recovering from an operation, the fellow you know is going to try and hold you up chatting for half an hour, all of them taking the invigorating fresh sea air and enjoying the kaleidoscope of ever changing colour that is Galway Bay. They are out there day and night and in all kinds of weather. It is a treasure.

THE SENSE OF PEACE AT WATERSIDE
We are fortunate in our waterways, Galway was originally known as Streamstown. Our cityscape is dominated by the river, the canal and the sea with the many millraces adding some extra character. The river must be the fastest flowing in the country but there is a little corner of Waterside, between Galway Rowing Club and Steamer’s Quay that induces a sense of calm and peace, which is epitomised by the slow movement of the ducks.

COLLERAN’S BLACK PUDDING
The rich quintessential taste of Galway, originally made for the breakfast table but now recognised to be of such quality as to grace the dinner menus of some of the best restaurants.

What would your seven wonders of Galway be?