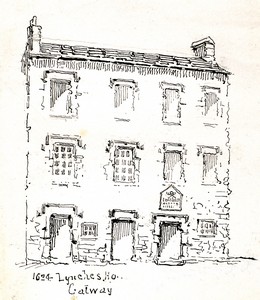 In 1807, the Reverend Edward Mangin wrote a 3-volume romantic novel entitled George the Third in which he headed one of the chapters “Which would not have appeared had it not been written”. In it he invented a story about the Mayor of Galway, James Lynch Fitzstephen, hanging his son. Thirteen years later James Hardman published his History of Galway in which he slightly changed, and greatly elaborated on the story.

This gave Mangin’s story a much wider audience, especially in this country and so the legend became history. It was copied by many writers over the last 200 years, books written, plays written, films made, etc.
All of this happened in spite of Mangin writing to a Fr. Thomas Tierney in the Augustinian saying he invented the story, and Hardiman prefacing his version by saying “Most of the minor incidents contained in this narrative are the offspring of fancy but this by no means affects the truth of the principal occurrence.

There are different versions of the story, but essentially it tells how the mayor’s son, Walter, in a fit of jealousy or greed, murdered a young Spaniard named Gomez who had come to Galway at the mayor’s invitation. The son was tried and found guilty, but no one would carry out the execution, and so in a fit of ‘unbending justice,’ the mayor, who was also the magistrate, hanged his son from a window in his own house in Lombard Street.

The house in which this grisly event is supposed to have taken place was rebuilt in 1624, and according to Hardiman in 1820 “Still exists in Lombard St. which is yet known by the name “Deadman’s Lane…. which is distinguished by a handsome representation, carved in black marble, of a human skull with two bones crossed beneath”. It was supposed to have been put up by some of the Lynch family as a public memorial. In 1842, J.S. Coyne described the building as ‘a tottering old house’. In 1844, the notice of the Town Commissioners was drawn to ‘the dangerous state of the house, known by the name of the ‘Cross-Bones House’. Local papers of the time describe the shoring up of the house with baulks of timber which tended to impede traffic so it was decided to take down ‘this famous old building which threatens death to all who approach it’. It was demolished in 1844.

There were talks of rebuilding but money was scarce during the Famine. In 1853, it was proposed to erect a monument for the reception of the old Cross-Bones – why not, at very small expense, put it on a wall composed of old stones near the church in its original place, near where the old house stood and in doing so, widen the street. Fr. Peter Daly is credited with the construction of the monument as we know it today, and with the insertion of the memorial plaque just over the skull and crossbones.We recently came across these two drawings of the Lynch house in the National Library, and they are very different. The first was drawn by S. Walker and printed on November 11th, 1792, and is titled “Lynch’s House in Lombard Street”.

As you can see the artist began to draw the stonework around the doorway on the left and then stopped, possibly to highlight the carved stone on the windows and doors. The second drawing, artist unknown, was drawn some 30 years later. It describes the house as being in ruins and is very similar to one drawn for Hardiman’s History. The only common thread between the two drawings is the skull and cross-bones plaque (which you can see in the inset), but its positioning is different on each building.All of the above information is taken from the definitive article on the subject which was published by the late Father ‘Max’ Mitchell in Volume 72 of the Galway Archeological and Historical Journal in 1971 entitled “Mayor Lynch of Galway” and in which he proves that the ‘Lynch Legend’ was exactly that, a legend.