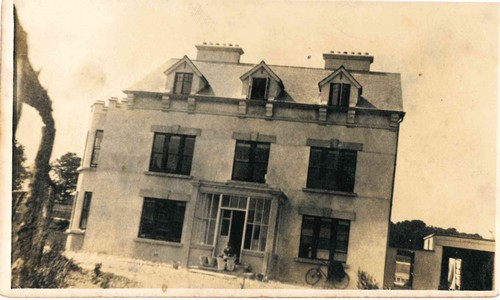 Mrs. Holmes was a relation of the O’Hara-Burkes who owned Lenaboy Castle and the Lenaboy Estate. She persuaded them to sell some of their land, ‘the lower pasturelands’ farthest away from the house, down near the gates of the estate to be precise. There, she built the house in our photograph which became known as ‘Greenmount’.

She ran it as a B&B but eventually, it became too big for her and she converted some farm buildings in what we now know as Lenaboy Park and built herself a small house.
In 1933, Jack Keogh bought ‘Greenmount’ and set about converting it into an hotel. He named the hotel ‘The Warwick’ after a painting of a flagship called ‘The Warwick’ which he had bought in an auction in Ballinahinch. The Hotel had nine bedrooms, the telephone number was Salthill 20 and the bed and breakfast rate was nine shillings and sixpence. There were 8 tennis courts free to al residents.

A contemporary advert described it as follows ….. “The most modern equipped hotel in the west of Ireland with parking space for 40 cars. Wireless. Standing in its own gardens overlooking the sea, every room with hot and cold running water, central heating, bedside light, electric fire and the very latest coil spring mattresses and bases …… fully licensed, free garage; petrol, oil and repairs on the premises. Terms four guineas”.

It was known locally as ‘the house that Jack built’ as Jack Keogh developed it into one of the leading hotels in the west with a number of extensions and changes. After Jack died, the business was carried on by his son Austin and Austin’s wife, Bernie, and later by their son John. It was always a busy place, winter or summer, a great commercial house that also hosted dances, student hops, bridge clubs, weddings, Saturday night knees-up and sing song entertainment with Molly Browne and company, the Galway Lions Club Late Late Breakfast, countless Arts Festival events.

Indeed it has been described as the heart and soul of the music and arts scene in Galway in the 1980’s and 1990’s. A local D.J. known as ‘Doc’ O’Connor started holding student nights in the ballroom of the hotel and these went so well, he was able to buy the Warwick and set up in business with his wife Sandra. They began to refurbish the building and at one stage had 100 people working there. Sadly, it became a victim of the economic crash and was eventually sold. It was vacant for a number of years and has now been demolished to make way for an old folk’s home.

Our photograph dates from the 1920’s and shows the original house ‘Greenmount’. The name of the house would suggest that it was all green fields in that area.