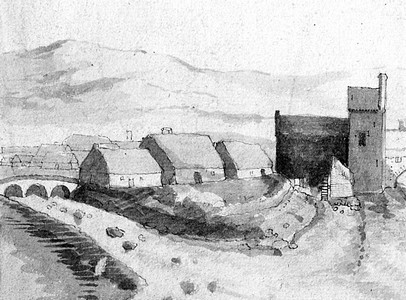 This drawing is of a detail from a “Prospect of Galway” drawn by Thomas Phillips in 1685. It shows the southern end of the middle suburb with Balls Bridge on the left, and the bit of an arch you can see on the far right was part part of the West Bridge.

Before the establishment of Mill Street as a thoroughfare in the mid-18th century, the only means of communication by road with the southern suburb and Iar-Chonnacht was via this bridge. It was the focal point of all routes leading from the west and north-west. Located at the south-western end of Dominick Street Lower, this bridge gave access to Ballymanagh (Baile Mheadhónach), the middle suburb of the town.

It was originally identified as ‘Bald Bridge’, commonly known as Droichead Maol. The Irish word maol could be interpreted as indicating that the bridge did not possess any parapets, though the drawing would seem to suggest otherwise. It has also been suggested that maol may signify that the bridge was not fortified, thereby distinguishing it from the principal West Bridge which was protected by three castles or towers.

Bald Bridge corrupted to Balls B by the early 18th century to Balls Bridge. It is shown as a solid stone structure with four cutwaters and a span of three arches which would suggest that it had to cope with a significant flow of water. The river that flowed beneath this bridge was considerably altered in the 19th century when it was incorporated into the canal. A swivel bridge was erected on the site of the older structure in 1851, and because of the decline in the traffic on the canal, this bridge was also replaced by a more permanent structure in 1954.

This image is from “Renaissance Galway, Delineating the Seventeenth-century City” by Paul Walsh, which has just been published by The Royal Irish Academy. Galway is unique in this country in possessing a large-scale detailed bird’s-eye map of the city made in 1651. Paul Walsh has selected 38 sections of the map, blown them up and accompanied each with a wonderfully informative explanatory essay, and in doing so has presented us with a remarkable visual tour of the urban landscape of the period and also various coats of arms, allegorical images and aspects of everyday life. Illustrations from other sources are included as well.

This book which is very highly recommended, will be launched on this day week, October 10th at 6pm in the City Museum and all are welcome. That afternoon, from 2-5pm, there will be a seminar on the 1651 map in The Moore Institute in NUIG. The panel of speakers includes Jane Conroy, Sarah Gearty, Brid McGrath, Annaleigh Margey, Nollaig Ó Muraile, Pádraic Lenihan and the author Paul Walsh. Again, all are welcome to what looks like being a fascinating event.