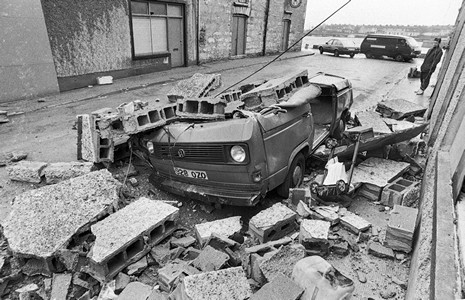 The Simon Community takes its name from Simon of Cyrene who helped Jesus carry the cross. It was founded in London in 1963 by Anton Wallich-Clifford and a branch was set up in Dublin in 1969.

Early in 1979, Frank O’Leary OFM spoke at a meeting in Galway entitled Poverty in Ireland about the work of Simon in providing shelter, friendship and acceptance to homeless people. Two psychology students, Margaret Brehony and Kathy O’Grady drew attention to the fact that there were rough sleepers in Galway too.

In October, they teamed up with Conall Mac Riocard, a philosophy student, and they started doing a soup run twice weekly. They made the soup and sandwiches at home and the three of them would do the run. On their first night they met only one person, but gradually the numbers increased. The volunteers found that the experience of squeezing into a small car and picking one’s way over rubble, broken glass or perhaps rats to a man lying in a corner provided them with an inescapable motivation for working towards the goal of a night shelter. At the time, one of the clients (they were described as ‘skippers’ or ‘being on the skip’) slept in a pigsty opposite the Presentation Primary School, some in a railway siding near Lough Athalia, some in skips, in the bathing shelters in Salthill, a rat-infested cottage in Frenchman’s Lane, in cardboard boxes, one young man slept in a disused telephone box that had fallen down at Ballyloughane beach and was suffering from pneumonia when they found him. In one case they had to climb over an 8-foor fence to get into some clients in dark undergrowth behind the Claddagh Palace. One of the main consequences of sleeping rough was infestation.

At the time the Legion of Mary had a 6-bed women’s shelter in Abbeygate Street and one for men in De Montfort House in the Claddagh.

Most of the people in Simon were volunteers, many of them students. They were skilled, idealistic, articulate, non-political and media-savvy. They organised protest marches to make the authorities take notice as there was a lot of buck-passing between the Western Health Board and the Corporation. Among those who helped were Billy Loughnane, Dr. Maeve Fitzgerald, John Hogan, Frances O’Brien, Michael Gorman, John O’Connell. Ray Weldon, Peter Butler, CaitrÍona Clear, Jackie O’Dowd, Des McSharry, Brian McGrath and Maighread Ní Chuirc.

Once one became a volunteer, Simon became part of one’s DNA. One treated people for what they were, not for what one wanted them to be. As they got to know clients, they realised they had other problems apart from addiction. They rejoiced when a client went on the dry, and mourned when they went back on the booze. On July 30th, 1980, a homeless man, Kevin Malone was burned to death in a car at Spanish Parade. At his inquest, the coroner only called for the authorities to remove derelict cars from the area.
November 1980, Councillors pledged to house the homeless. Christmas Day, 1980, one man spends his 9th Christmas in a disused stable. January 2nd, 1981, the soup run meets a 10 year old boy sleeping rough, not his first night doing so. April 1981, 20 members staged a public sleep-in to protest against the delay in providing a night shelter. Weeks later, they occupied a disused house next to Leisureland and announced their intention to open it as a night shelter. Security men boarded up the doors and windows and allowed nobody in or out. Mayor Bridie O’Flaherty and Michael D. Higgins negotiated pledging immediate and long term efforts to house the homeless. The occupation generated national publicity and led to an increase of offers of help.

At Christmas 1981, they bought 3 prefab buildings and with the help of David Coen from Gort who provided them with a truck and a crane, they moved these to the Fairgreen on Saturday night. They had the first one in place when the locals began to arrive for mass, and prevented the installation of the other two. This prefab became home to about 15 men. At 4am one morning a petrol bomb was thrown through the window but a volunteer, Buddy Lee, threw it back out. The Gardai warned the arsonist would return and shortly afterwards, as the workers and clients went to the Franciscans for their weekly treat (a shower and a meal), their building was burned to the ground.

The campaign for a permanent premises came to fruition in June 1983 with the opening of Fairgreen House. It was erected by Galway Social Services with funding from the Health Board and was a uniquely successful partnership between voluntary and statutory bodies, Simon volunteers and Social Services employees. To meet the needs of older men who were incapable of looking after themselves, a residential house was opened in October 1983.

At one stage it was suggested at a Corporation meeting that part of Eyre Square might be electrified so that any of the winos taking a pee might get an electric shock. Another such meeting decided on giving a grant to a cat’s and dog’s home rather than to Simon.
In 1990, Simon opened a residential home on Dyke Road. On January 5th, 1991, two homeless men, John Mongan and Pa Donlon, were killed when a major storm blew down a wall which crushed an abandoned van in Lower Merchant’s Road. They were sleeping there. Three others managed to escape though one of them, Dennis Connolly was hospitalised for months after a falling lump of concrete with a spike attached speared him in the back. These deaths brought to six the number of homeless men who had died within a few months.

In more recent times, when the crash came, it accelerated the problems for Simon as people lost jobs, the Government stopped building, families had to be housed in hotels. People needed a home of their own and often needed supports when accommodated. Problems became more complex, poly-addiction was becoming more common as was poor mental health. The average age of clients was getting younger.

Our photographs show a homeless Galwegian being visited on the soup run in 1981 and the crushed van in which the two men were killed on Lower Merchant’s Road in 1991.

If you would like to volunteer with Galway Simon Community, to donate to the charity or organise an event to raise funds, please log on to www.galwaysimon.ie or call +353 (0)91 381 828.