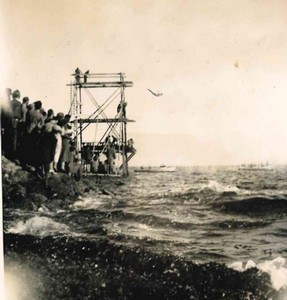 Up until the mid-nineteenth centuryImages and Links, there was a cluster of thatched cottages at Blackrock. On “The Night of the Big Wind”, these were literally blown away by the ferocity of the storm and the tide and most of the occupants had to move inland. They were mostly fishermen and there had always been a tradition of fishing in the area.

Blackrock was also a favourite place for men bathing and in 1885, Mr. Moon and some of his friends decided to place a springboard there. Unfortunately, they did not have ‘planning permission’ from the owner of the land, Colonel O’Hara, and he had the board removed and made it difficult for the bathers to get to the rock at all. It ended up in court and the Urban Council stepped in and signed a lease giving them a public right of way to the bathing area.

In April, 1904, the Urban Council sought tenders for the erection and maintenance of the springboard at Blackrock. This structure was quite primitive and consisted of a wooden walkway with the board at the end, all supported by some metal poles. It was eventually replaced by this more elaborate structure much further out into the water which we see in our photograph today (which was kindly given to us by Cliona Clarke). Swimming galas were held here, usually under poor conditions, the idea of a swimming pool with lanes was a pipe dream then.

The building of this tower on four levels which included platforms and springboards, introduced Galwegians to a new sport, diving. This was a sport, originally known as ‘plunging’ which was how one entered the water in a swimming race and which evolved into ‘fancy diving’ where the athlete could perform acrobatics while in the air. It became an Olympic sport in 1904. At Blackrock, diving competitions were usually held during swimming galas. In 1938, two American Diving Stars gave an exhibition during a club gala and attracted huge crowds. This may well have been the occasion on which this photograph was taken.

Eventually, wear and tear began to tell on this structure and when an elderly woman fell off and into the water (happily, she was rescued) it forced the Corporation into a rethink and in 1953, this tower was replaced by the current diving tower which is one of the most recognisable structures in the west of Ireland, an iconic image of Galway and dear to the hearts of many.

In my teenage years, some of us liked to show off performing invented dives such as the ‘dead man’s dive’, the ‘superman’ dive or the ‘birdy dive which was the most difficult. It was a running dive and you had to flap your arms like bird’s wings, but the hardest part was you had to whistle while in the air, like a bird going ‘tweet tweet tweet’.

The Old Galway Society are hosting a lecture this evening with the title “Children and Crime in the 19th Century”. The Speaker is Geraldine Curtin from the Hardiman Library in NUIG. The talk will start at 8pm in their new venue, The Claddagh Hall at Nimmo’s Pier. All are welcome.