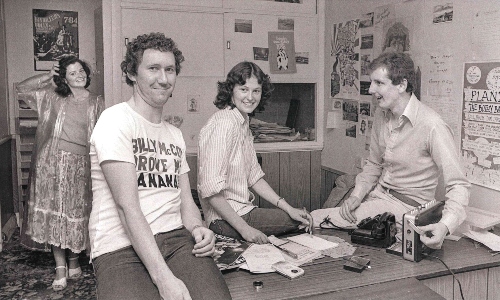 In 1978, RTE were on strike for some time which meant the repair shop in O’Connor TV had nothing to do, so John O’Sullivan and friends built a 30-watt transmitter and this prompted Tom O’Connor, John O’Sullivan and Eamonn Geary to get together and set up a pirate radio station called Independent Radio Galway.

Their studio was in an attic in the courtyard behind Cahill’s shop in William Street, and when this space became too small, they moved to a larger room over Garavans, where Johnny Waldron’s Joke Shop is today. The 199 metre aerial ran from the top of Glynns to the top of Gleasons. Their furniture consisted of 2 tables, a few chairs, the home-made transmitter, 2 turn tables and a few minor pieces of equipment.

The station started broadcasting on April 15th, 1978. In those early days, they were on air from 10am to 12 noon. Most of the staff were students, many of them volunteers but some were paid and even though they were illegal, they paid their PAYE which Revenue accepted. Eamonn Geary was the station manager and John O’Sullivan the technical director. Most of the D.J’s had nicknames, Joe O’Reilly had a breakfast show; Tom Prendergast was known as ‘The Duke’; Caoimhín Mac Aodha was in charge of music and Marion Farrell had a magazine show; Mike Mulkerrins was known as “Paul Jones”, Liam Stenson was ‘Billy McCoy’; Áine Hensey read the news and did Irish language programmes; Mary Hyland was another newsreader; Kieran Muldoon covered sport; Brendan Dowling and ‘Tiny’ Walsh covered soccer; Tom Gilmore did country music and Chris Williams was also a DJ; Mrs Manifold had a religious programme and she was allowed talk about religion but not about contraception which was a hot topic at the time. One day, she started on religion but switched to contraception. The DJ simply switched her off and played music while she kept talking to no one except herself. The same tactic was used on Fr. Robert E. Lee when he talked too much.

Gerry Mulholland wrote the jingle “Independent Radio Galway 199” and the UCG choir sang it. It would be fun to hear a recording of that today. The broadcast hours quickly extended and went from 8am to 11pm. The content was mostly music, but there were a lot of discussions and debates, guest speakers, interviews etc. People used the station as a messaging service. They were raided once by P&T staff and the Gardaí, but they had a spare transmitter and were back on air within an hour. They had an inkling beforehand the raid would happen so two of the students set up a small table outside Matt O’Flaherty’s shop to collect signatures “Save our Station”. A lady from Mervue was told that all their equipment would be taken during the raid and she said “That’s terrible, you should call the Gardaí”.

Another time, the transmitter was in an attic over Powells. The man in charge heard a warning bell and thinking there was a raid, he opened a skylight, climbed out with the transmitter which was hot, slid down the roof on to a flat section, jumped a gap on to Taaffe’s roof and found a window there which he opened and went in. When the boys went looking for him, they found him drinking tea with Una Taaffe.

If a programme finished and the next presenter had not arrived, whoever was in the office had to take over the microphone. The news and current affairs team had occasional scoops and were taken seriously by the public. There was always great craic in the office.

When RTE 2 came on air, the advertising for Independent Radio dried up overnight and so, sadly, that station closed down on Saturday, 28th of July, 1979.

Our thanks to Liam Stenson for today’s photograph which shows Fionnuala Concannon, Liam Stenson, Mary Hyland and Mike Mulkerrins in the studio.