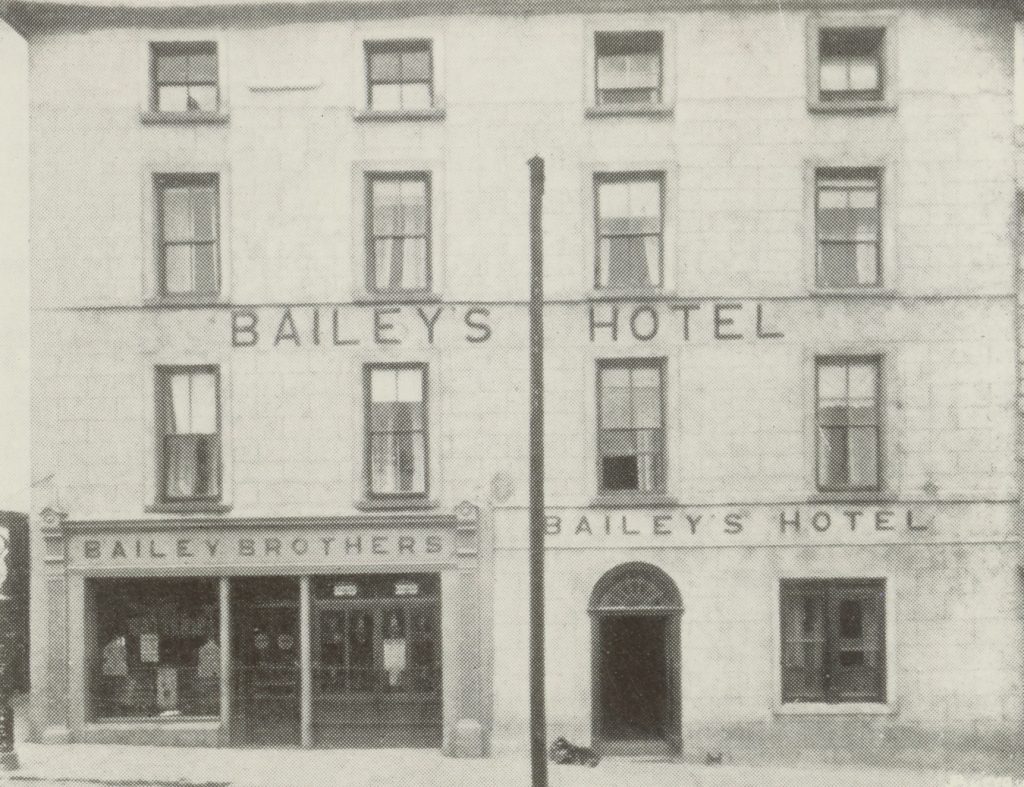 In fact Baileys was much more than just a hotel, they were a very entrepreneurial family. They had a restaurant at the back of which was their very popular ballroom. They had a bicycle and motorcycle shop where the ‘Bailey Brothers’ sign is. They were sole agents for The Swift Cycle Co., The James Cycle Co., The Osmond Cycle Co. Etc (they claimed they were the oldest firm in the trade in Galway). The price of a Rex motor bike was 25 guineas here in 1907. They had a Motor Garage and Engineering Works with the sole agency in Co. Galway for Morris, Fiat, Chrysler, Citroen, Armstrong Siddely and Austin., and they were contracting agents for Ford and Studebaker cars.

In 1924, they advertised “The Shall and the Will”. ‘I shall own a car some day’ has been changed to ‘I will own a car today by the advent of the 15.6 Durant – just a real car for £195. The 15.6 Rugby by Durant, four cylinder engine, 1.56 Treasury rating, self starter, five lamps, five tyres and spare rim, right hand steering, five-seater, black maroon or blue”. The van model cost £175. They stocked Clincher motor tyres and also the well known STERNOL AMBROLEUM (“It sticks to the teeth”) gear lubricant and silencer. Their mechanics did high-class repairs including acetylene welding, body building, painting etc. They also supplied marine engines and petrol outboard motors. And they hired out motor boats and cars.

In addition to the Bailey family, those who worked there included John Walshe, Tom Burns, Johnny Lyons, Martin Browne and the head chef in the hotel was a Mr. Cummins. You can see part of St. Patrick’s Avenue to the left.

This complex was later replaced by the Odeon Hotel and today it is an office complex.