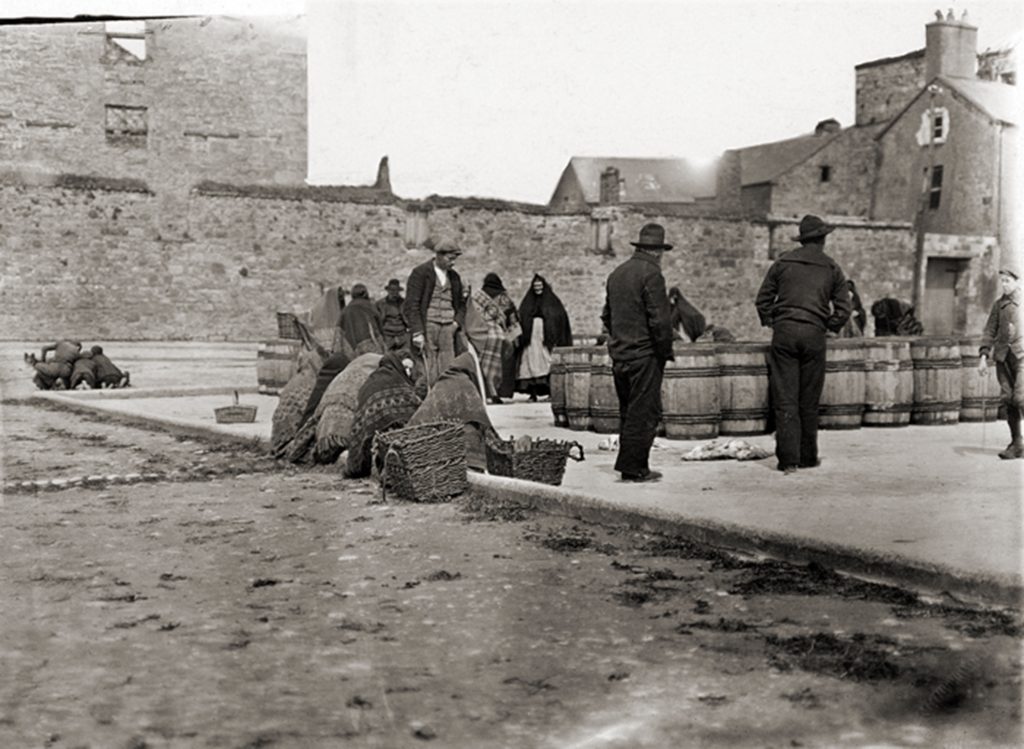 “The Younger Women with their cloaks draped around their heads looked piquant enough, their faces had not unfrequently the sweetest expression of passion, and their lips pouted charmingly. The old fisher-wives, on the other hand, who sat near the casks and smoked damp tobacco in short clay pipes, had something witchlike and menacing about them”.

So wrote Julius Rodenberg in 1860. He obviously had a thing for beautiful young Galway women as he also wrote about them elsewhere. As for the older women, I would say they just glared at him because he did not buy any fish. Otherwise, what he wrote could be true of our 1908 photograph.

The Fishmarket was originally held in Bridge Street. At the time there was only one bridge over the river ... The West Bridge or O’Brien’s Bridge as it is known today. This meant a long roundabout walk for Claddagh women who had to haul their heavy loads of fish in various scibs or creels or cishs. The market was as important to the town as it was to the people of Claddagh, and eventually, the women’s complaints were listened to and a wooden bridge was built where The Wolfe Tone Bridge is today. It was quite dangerous but it had the effect of making the area we know today as the Fishmarket more convenient for the Claddagh women, and they quickly made it their own. It may look romantic in our picture, but it must have been cruel in wet or stormy weather trying to make a living in this open space.

The wooden bridge was replaced by a metal one in 1887, which in turn was replaced by the present one in the 1930’s. Folklore tells us that if you passed over the bridge after midnight, you would be attacked by a ‘Gliomach’, a sea monster. This was probably invented by Claddagh women to get their husbands home early from city pubs.

In the background, you can see the ruins of Burke’s Distillery behind the high wall that included some cut stone windows. This distillery opened in the 1840’s and employed mostly workers who had come from Joyce’s Distillery. The coming of the railway meant that cheaper product could come to Galway and this forced Burkes to close in the 1860’s. The site was later taken over by McDonoghs who opened a chemicals and fertiliser factory there.

The left hand side of the house we see on the right was occupied by Bridget O’Connor who had a little sweet shop; the right hand side by Monaghans. One of the distillery Burkes lived upstairs there. Next to that was a mill and beside that was Blake’s Castle. The Fishmarket was a bustling place full of barrels, baskets and scibs, the Irish and the English language. Our photograph has a mixture of shawls, práiscíns, báiníns, cáibíns, buyers and sellers. It was originally taken by Lillian Bland, a distinguished pioneer of aeronautics in Ireland and a well known journalist.