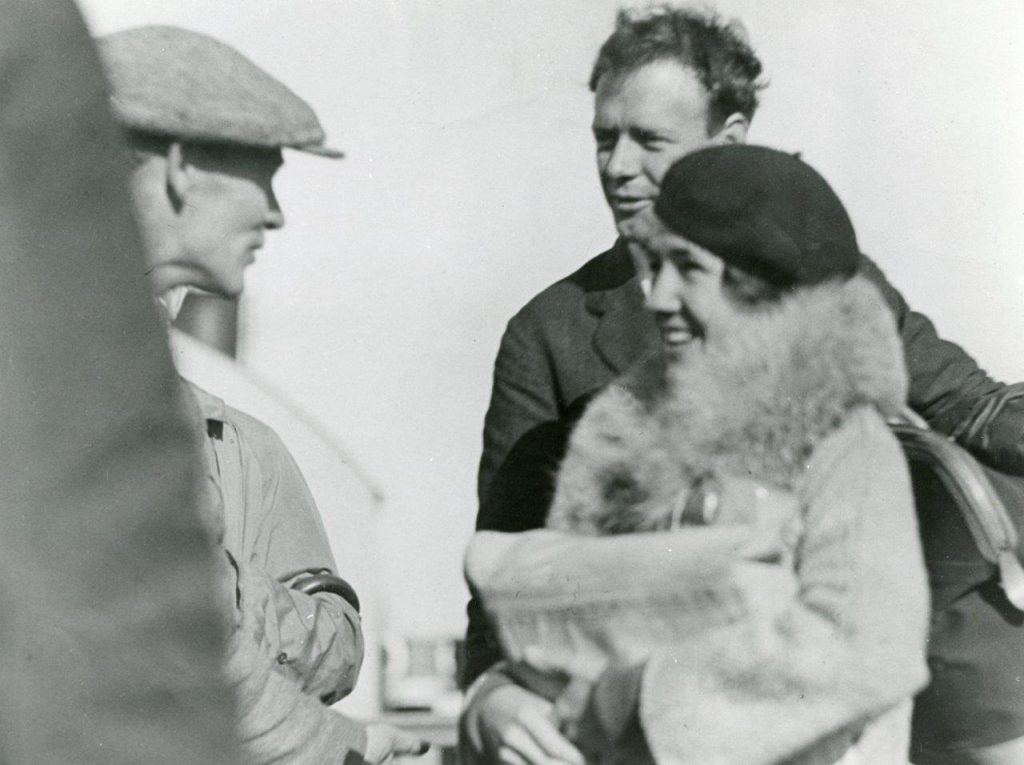 Out of the mists of the Monday afternoon of October 23rd 1933, there came to Galway a seaplane with a blue black fuselage, orange wings and silver floats. She circled low over the Claddagh, swooped across the old Spanish Arch, and taking a wide sweep over Lough Corrib, swung around and landed near the light-house at 65 miles an hour with scarcely a ripple on the water. Claddagh boats put out in welcome for it was Colonel Charles A. Lindbergh who had flown alone from New York to Paris in May 1927, in 33.5 hours. He had come to Galway as a technical adviser of Pan-American Airways to see what facilities Galway Harbour had to offer as a seaplane base. The Claddagh boatmen towed his plane into New Docks where he was met by several local dignitaries.

He had left Southampton Water at 11.15am, flown over Cork and Cobh, circled over Valentia and without landing anywhere in the South of Ireland, headed north for Galway Bay where he landed at 4.45pm. His romantically coloured seaplane was a Wright-Cyclone with a single engine of 750 horsepower and it was named Tingmissartog. It was quite the best kind of machine for the type of work he was undertaking. The pontoons were designed to alight on the sea with comparative safety, but in an emergency, they could alight on land.

Mrs. Annie Lindbergh, who accompanied her husband, won the hearts of everyone who met her in Galway. It was about 18 months after the kidnapping and death of their son, and she therefore did not like any crowds or public receptions of any kind but “I could fly for hours and hours in my husband’s seaplane, and I am quite content.”She signed hundreds of autographs while she was here. In deference to her desires, no official reception was given but Mairtín McDonogh, chairman of the Harbour Commissioners and his brothers acted as their hosts. They attended a private dinner. Both Mr. & Mrs. Lindbergh were very abstemious and only took the smallest of sips of the fine wines they were offered. They retired to bed shortly after 10pm “I always desire my full quota of sleep. In an open cockpit all day with the world for your route map, you need ample rest and a steady head”. “And anyhow” said his wife, “the air above keeps one free from insomnia and quite apart from that, we get good health”.

Lindbergh was up at 6am the following morning to supervise the refuelling of the plane by Dan Quinlan of Pratt’s Oil. Then he and his wife toured Conamara and Lough Corrib. The following morning, they left Galway at 11.25am and had to be careful towing the plane out of the docks, the dock gates being 52 feet and the wingspan of the plane was over 40 feet. Annie, who was wearing breeches and a plaid flying tunic, was content to navigate across land and sea for her husband. They expressed their thanks to Captain Meskill, to Dan Quinlan, to George Smith of the Post Office and to the McDonogh family.

A large crowd gathered to see them go and cheered wildly as the plane took off. It circled Galway twice and then dipped its wings in salute before flying north to Derry. Col. Lindbergh felt that in any development of trans-Atlantic travel, Ireland held the key, and Galway was the most suitable and central base with a bay that is quite safe, convenient and well sheltered. There was no reason why an all the year round service could not be built up from this. American interest in the scheme was one of the most hopeful factors that had emerged in the efforts to develop aviation in this country.

Our photograph shows Dan Quinlan, on the left, talking to Mrs. Annie and Charles Lindbergh down at the Docks.