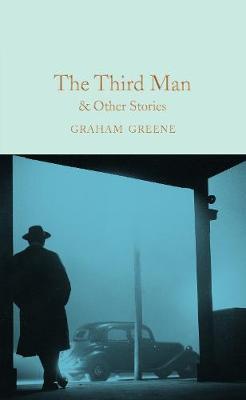 The Third Man and Other Stories

Description for The Third Man and Other Stories Hardcover. Series: Macmillan Collector's Library. Num Pages: 344 pages. BIC Classification: 1DFA; 3JJPG; FC; FHD. Category: (G) General (US: Trade). Dimension: 150 x 93. .
Rollo Martins, a failing novelist, is invited to Vienna by his best friend, Harry Lime. The city he arrives in is unrecognizable - torn apart by the Second World War and shared between the occupying Allies. What's more, Harry is dead, and the circumstances look suspicious . . . Determined to uncover the truth, Martins must pick through the rubble of this broken city in search of answers. Accompanied here by twelve further stories that exhibit the full range of Graham Greene's masterly storytelling, The Third Man is an atmospheric noir that oozes with suspense. ... Read more With an introduction by the biographer and editor Professor Richard Greene. Designed to appeal to the booklover, the Macmillan Collector's Library is a series of beautifully bound gift editions of much loved classic titles. Show Less

About Greene, Graham
Graham Greene was born in Berkhamstead, England in 1904. The fourth of six children, he was educated at Berkhamstead school, where his father was headmaster, and then at Oxford University. He went on to work as a journalist for The Times where he met Vivien Dayrell-Browning, who was instrumental in his conversion to Catholicism. They married in 1927 and had ... Read moretwo children. Greene's first novel, The Man Within (1929), was favourably received and kick-started a prolific writing career that included the novels Brighton Rock (1938) and Our Man in Havana (1958), short stories, biographies, plays and travel books, as well as film criticism. Considered one of the leading novelists of his generation, he was shortlisted for the Nobel Prize for Literature in 1967. Greene died in Switzerland in April 1991. Show Less

Reviews for The Third Man and Other Stories

Goodreads reviews for The Third Man and Other Stories