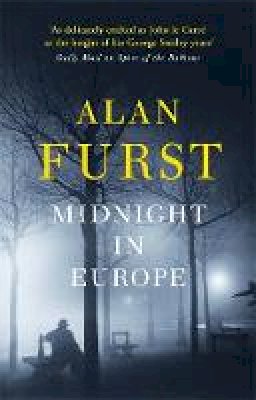 Description for Midnight in Europe Paperback. Alan Furst - hailed 'an addiction' by THE TIMES and 'in a class of his own' by William Boyd - returns with a thrilling new novel set during the tense build-up to World War II. Num Pages: 272 pages. BIC Classification: FHD. Category: (G) General (US: Trade). Dimension: 130 x 197 x 28. Weight in Grams: 258.
Paris, 1938. Democratic forces are locked in struggle as the shadow of war edges over Europe. Cristian Ferrar, a handsome Spanish lawyer in Paris, is approached to help a clandestine agency supply weapons to beleaguered Republican forces. He agrees, putting his life on the line. Joining Ferrar in his mission is an unlikely group of allies: idealists and gangsters, arms dealers, aristocrats and spies. From libertine nightclubs in Paris to shady bars by the docks in Gdansk, Furst paints a spell-binding portrait of a continent marching into a nightmare - and the heroes ... Read moreand heroines who fought back. Show Less

About Furst, Alan
Alan Furst is widely recognised as the master of the historical spy novel. Now translated into eighteen languages, he is the author of thirteen novels including MISSION TO PARIS, SPIES OF THE BALKANS - a TV Book Club choice - THE SPIES OF WARSAW, which became a BBC mini-series starring David Tennant, and THE FOREIGN CORRESPONDENT. ... Read moreBorn in New York, he lived for many years in Paris, and now lives on Long Island. www.alanfurst.net Show Less

Goodreads reviews for Midnight in Europe