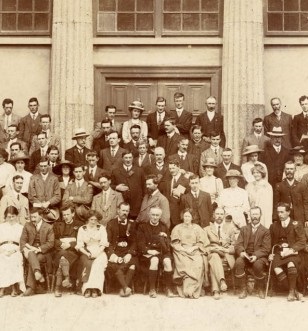 This photograph of The Conradh na Gaeilge Oireachtas and Árd Fheis held at The Town Hall, Galway in 1913 was discovered in a box about three years ago by the Curran family in Dublin. It had been kept there by their mother who was a daughter of Micheál Ó Foghludha, who was later to become president of the Keating Branch of the Gaelic League. They began to research the names of those involved,

and in an act of true generosity, they presented an enlarged copy of the photograph to the Town Hall on Friday 6th December 2013, where it will be on permanent display. It is a wonderful gift to the city. It is rare to find a photograph with so many of the political, military and cultural elite of the period, and I am sure it will become a major source of debate and discussion in the Town Hall (click 'read more...' to view video). In the below video Fergal McGrath of the Town Hall Theatre introduces Dara Folan and Prof. Emeritus Gearóid Ó'Tuathaigh of NUI, Galway to speak on the occasion of the presentation by the Curran Family (Ado, Fergus and Manus) of a photograph of the 1913 meeting of The Gaelic League (Conradh na Gaeilge) to the City of Galway - some 100 years later and at the same location. The photograph is notable in that it features many recognizable faces from the era, for example, three future Presidents of Ireland in Douglas Hyde, Eamon de Valera and Sean T. O'Kelly; also a number of the signatories of the 1916 Proclamation including Pádraic Pearse, Sean Mac Diarmada and others such as Constance Markievicz and Pádraic Ó'Conaire. Read more about the occasion and the photograph on Tom Kenny's Old Galway article.