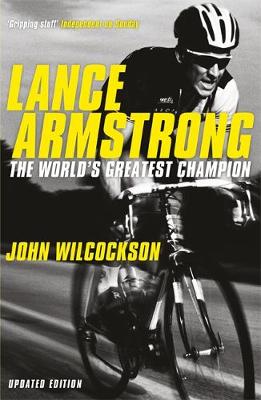 Description for Lance Armstrong: The World s Greatest Champion Paperback. 'From cancer to cycling superman: is this the greatest story in modern sport?' Guardian Num Pages: 432 pages, ports. (chiefly col.). BIC Classification: BGS; WSQ. Category: (G) General (US: Trade). Dimension: 197 x 128 x 28. Weight in Grams: 288. Clean copy.
Few champions have astonished the world as much as Lance Armstrong. A cancer survivor who went on to win the Tour de France an unprecedented seven times, he is an inspiration to millions. Now the full story can be told. With complete access to Armstrong, and to his inner circle, and drawing on interviews with family members and training partners, coaches and celebrities, team-mates and rivals, friends and foes, sportswriter John Wilcockson tells of those who helped Armstrong along the way - including his mother Linda, his ex-wife Kristin and one-time fiancee Sheryl Crow - and explores the traits of ... Read morecharacter that made Armstrong unique. The story of Lance Armstrong is one of brutal, painful effort, of natural brilliance, of relentless ambition, of extraordinary glory. His achievement is all the more stunning for its unconventionality: a boy from small-town America who beat the world. Brash and fiercely competitive, Armstrong has never been without close friends or bitter enemies. His achievements have been dogged by accusations of doping, accusations of secrecy, and by questions about how triumph on such a grand scale could be possible - questions that are addressed head on in LANCE ARMSTRONG. Tracing the highs and lows, and bringing alive the drama of the races in which Armstrong smashed expectations time after time, LANCE ARMSTRONG gives the complete story of a matchless champion. Show Less

About Wilcockson, John
John Wilcockson has been writing about cycling for four decades. He has been the editor of five cycling magazines, was the first cycling correspondent for The Times and has won awards for his journalistic services. He has written more than a dozen books. A graduate of the University of London, Wilcockson now lives in Bolder Colorado.

Reviews for Lance Armstrong: The World s Greatest Champion
Fascinating ... Wilcockson manages to penetrate the psychological depths of the race's stars.
British Cycling
Captures the thrill of a race persistently immersed in controversy and rumour.
Irish Times
Sport is about the assertion of the will and that makes Armstrong the greatest athlete practising his trade
The Times
A must-read for all cycling ... Read morefans.
BBC Sport
Praise for 23 DAYS IN JULY
:
'The incredible story of the triumph of mind over body. Truly inspiring'
Time Out
Show Less