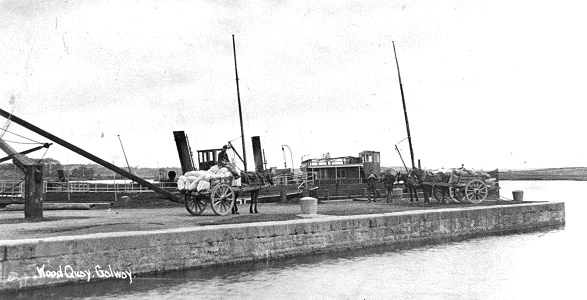 Alexander Nimmo made a survey of Lough Corrib almost 200 years ago in which he wrote the following “The lake has 50 miles of shore, occupies 30,000 Irish acres and contains 1,000 acres of arable land in its isles, and contracts into a very spacious river about two and a half miles above Galway, which, flowing by the town, communicates with the Atlantic. The fall from the summit of the lake to the sea is considerable, but to the Wood Quay, above the town, it is trifling, and the river is in parts very shallow, running over a bed of rocks and hard gravel. It is not navigable from the sea to the Wood Quay owing to its shallowness and the rapidity of the water, and none but small boats can come down; but unless in very dry seasons, it is thence navigable by boats drawing four feet of water and carrying from ten to twenty tons, with one square sail and four men, to Cong. They seldom sail, unless before the wind, and though the lake has many islets and sunken rocks, the only serious difficulty in navigation is at Buachally Shoal about four miles up the lake, and at Newcastle. These shoals could be deepened for a small sum and the whole made to admit vessels of much greater magnitude. The fine navigation which extends about 30 miles, and into a seaport town, seems to deserve more attention than it has yet received. A good chart with soundings and sailing instructions should be published, the shoals or rocks cleared or beaconed, and a communication opened with the sea”.

And so, in 1848 the first drainage scheme started which resulted in the waterways system we have in Galway today. Its primary purpose was to improve drainage thus reducing winter water levels and the areas of flooded land and also to improve navigation without any detrimental effect on the mills or fishery interests. The Eglinton Canal was built, the Claddagh Basin, the Galway, Gaol and Western rivers were dredged, tailraces, culverts, the weir, the salmon pass and Steamer’s Quay at Woodquay were constructed.

In the early days, Galway hookers and large rowing boats were used as transport vessels on the lake, taking material from mines on the upper Corrib and of course cattle and sheep to the fairs in Galway. The building of the canal meant that larger boats could travel from the sea to the lake, and for a number of years, it carried serious commercial traffic. The first steamer to sail on the lake was the “O’Connell”, a small black paddle steamer with a small raised deck. The first regular steamer service was organised by Father Daly using a boat called “The Lioness” to carry heavy goods, cattle, sheep, pigs etc. and it also carried a lot of tourist traffic. Many hotels would send cars and busses to attend the arrival and departure of the steamer.

The traffic of goods increased to the extent that a second steamer was brought on to the Corrib, a 94-tonner called “The Lady Eglinton” which travelled daily to Cong and back during the summer and three times a week during the winter. Other steamers to use the lake included “The Fairy Queen”, “The Saint Patrick”, “The Enterprise” and “The S.S. Cadogan”. The last commercial on the lake was the “Corrib Avanci”. Obviously, these steamers used to tie up at this pier thus giving it its name.

A terrible tragedy occurred on Steamer's Quay in 1934 when a car and its occupants plunged into the river and all four occupants were drowned. They included the driver Martin Keane, two Gardaí from Maam, Sergeant Forde and Garda Keneally and a passenger, Margaret Laffey from Cornamona. They had travelled with a patient to Ballinasloe Hospital that day and were on their way home. It appears that on reaching the Salmon Weir Bridge, they turned back to find the Headford Road. They took the wrong turning at Wood Quay and went over the end of the pier. At the Commercial Club nearby, there was a céilí in full swing and those involved were totally unaware of the tragedy. It was not until the following morning that enquiries began as the car had not returned to Maam. On the second day in the search, tyre marks were noticed at the pier head and the green Ford was located with all the bodies still in it. As a result, clear signposting and bollards were placed on the quay.

Our photograph, which dates from c.1890, shows a cartload of what looks like bags of flour, being delivered to a steamer. The pier is used regularly by boats like “The Corrib Princess” which must have taken many of thousands of tourists up the lake.