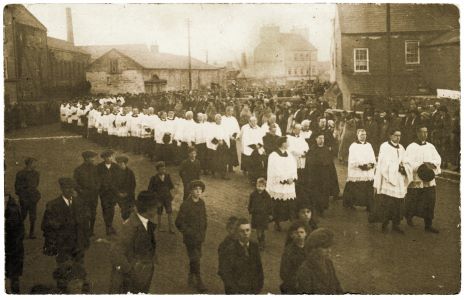 At about 3pm on the afternoon of Saturday, November 20th, 1920, William Duffy of Cloghscoilte near Barna was driving cattle locally when one of them got stuck in the mud. William noticed the part of a coat sticking out of the gap so he went for his neighbours Patrick & Thomas Lydon and later, Patrick Cloherty & Patrick Concannon from Truskey joined them at what turned out to be a grave. They uncovered part of the body and realised that it was that of Fr. Griffin. They decided to wait until it was dark so they covered up the body again, afraid that the Tans might return to remove it. William Duffy rode on horseback into Fr. O’Meehan in Montpelier Terrace to inform him of the tragedy. Fr. O’Meehan, Fr. Sexton & Canon Considine then hired Patsy Flaherty’s side car and went out to Clochsgoilte.

A number of locals were standing by the graveside and by the light of a lantern, they scraped the soil away and exposed the body. They had some difficulty moving the cattle who had gathered around the area, possibly attracted by the smell of blood. The body was quite fresh when discovered, decomposition had not set in. It had lain, with the feet facing Galway, in about two feet of soil. They removed the body about a quarter of a mile away to a hollow where there was a pool of water so they washed the remains and laid them on a bed of straw. And then they began their vigil and their wake.

It was decided the safest time to bring the body into Galway would be about 6am when milkmen would be travelling in to town.  Even at that time it was dangerous because of the activities of the Tans. They used an untrained donkey and Mrs. Duffy’s cart as transport. They covered the body with a lot of straw. Patrick Lydon and Martin Griffin had difficulty driving with the untrained donkey but they made their way slowly in the back way by Boulabeg, Rahoon and Shantalla to St. Joseph’s Church. John Gill of Aille and William Conneely walked a bit ahead of them to warn them of potential danger. They removed the tackle from the donkey (it never had to work again after that) and pushed the cart with the remains into the presbytery stable. Canon Davis thanked the men for their courageous and noble work. He had already ordered a coffin from Conneelys in Market Street, and he asked two Mercy Sisters to wash the body and lay it out, dressed in Mass Vestments. At each mass that morning, the canon announced that the body of Father Griffin was found the previous night with a bullet through his head and similar announcements were made in all churches in the city. The general population were horrified and sickened by the news. They could not understand why this had happened.

That afternoon, Doctors Sandys and O’Malley performed an autopsy and found that death was due to a bullet through the brain which went in at the right temple and out through the left. “From the state of his body, he must have been dead for four or five days, one eye was open and the features bore an expression of agonised determination”. Later, the body was placed in an open coffin in St. Joseph’s Church and thousands of people came to pay their respects. Some 12,000 people turned out for the funeral as Fr. Griffin’s remains were taken through the city and on to Loughrea where he is buried in the Cathedral grounds.

It was firmly believed that three newcomers to Galway, agents provocateurs who had vowed to exterminate Sinn Fein extremists, were responsible. They were billeted with the Auxiliaries in Lenaboy Castle where the murder took place. Their names were Smith, Barker and Ward.

The story became an international one, Fr. Griffin being the first priest to be murdered in Ireland since Cromwellian times. The authorities believed he had heard the confession of Patrick Joyce a few weeks before and so there was worldwide condemnation of the fact that they had tried to force information from the priest, information he had taken an oath never to reveal … whatever had been told to him in confidence in the confessional. This made it a crime against the Catholic religion in the eyes of many. The British Government strenuously denied that any member of their forces in Galway had anything to do with this brutal crime. They tried to spread theories about who the killers might be, suggesting that it was probably relations of the teacher Patrick Joyce who carried it out as revenge.  There was also, according to historians Eunan Ó hAilpin and Donncha Ó Corráin, an implausible countervailing rumour that Father Griffin had been shot by the IRA at the behest of the Church authorities because he was having an affair with a farmer’s daughter, on whose land his body was buried.

Our photograph, taken by Hill, shows the funeral approaching O’Brien’s Bridge from Mill Street. You can see the old foundry in the background.