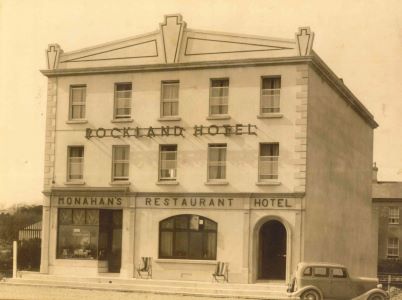 In 1923 Forster Park, the residence of Gerald Cloherty, clerk of the crown and peace for County Galway, was sold to surgeon Michael O’Malley. In July 1935 The Connacht Tribune reported that the purchase of plots in front of the house recently occupied by Dr O’Malley, and the question of allowing the purchasers to proceed with the building immediately, or to force them to defer until the road along the Promenade had been widened, was the subject of a long discussion at the Urban District Council meeting.

The plots had been advertised as building sites and planning permission was sought for two hotels but there were objections: “We are a long time looking for a town planning scheme in Galway, and now that we have got it. I strongly object to this building. We have one of the finest hotels in the country (The Eglinton) and you want to destroy it.” It was suggested that whatever building was allowed should be "in conformity with the rest of the houses in the locality and not the cheap-jack type of house that would destroy the whole outlook of Salthill".

The first one built was the Éire Hotel, later the Claremont, and later again sold to Ken Toft. It was part of a terrace of houses that extended to the tennis court of the Eglinton Hotel. The Rockland Hotel was built in 1935 and we have two interesting views of the building standing in splendid isolation just after it was finished. In the first image you can see part of the Hangar on the left and part of O’Malley’s house, which by now had been converted into a Garda barracks, on the right. Our second image shows the barracks on the left and on the right, the gap before the Claremont Hotel. The donkey and cart on the road was a common sight as local farmers delivered milk from door to door. In fact the tarring of the road some years earlier in 1928 was of concern to the city’s many carters who were afraid that their horses would slip on the smooth surface.

The Rockland was owned by the Monahan sisters and opened as three businesses, the sweet shop on the left, the restaurant, and the hotel. They advertised it as “Salthill’s most popular rendezvous for all occasions. Prominent situation on the Sea Front, beside Golf Links and Bathing Pool. Fully Licensed. Hot and cold Running water in all bedrooms. Modern Furnishing throughout. Personal supervision.” The telephone number was Salthill 40. This building has now been converted into a glass fronted block of apartments and is known as Rockland Court today. 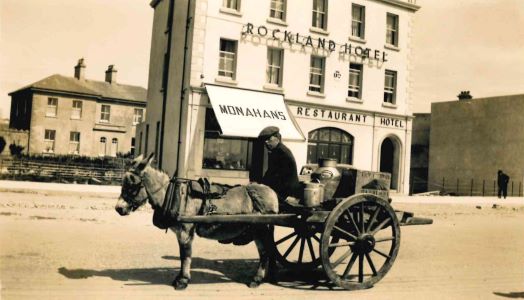 Shortly after these pictures were taken, work started on the construction of The Arcade to the right of the Rockland. Mrs Toft built an amusement hall on the ground floor and a ballroom on the first floor. The dance hall could hold about 300 people and was in regular use, especially by groups and clubs like Galway Swimming Club which ran Sunday afternoon dances there as fundraisers. The success of Seapoint Ballroom effectively killed off the dances here. In 1956, it was granted a license under the Gaming and Lotteries Act. Some time later, Western House was built to the right of the Rockland.