A CLADDAGH CHRISTMAS LONG AGO 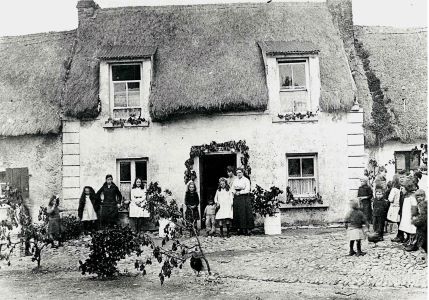 These were the memories of Christmas in the Claddagh long ago as recalled by Martin Geary of Father Griffin Road and published in this paper in 1979.

“All the people of the street would start cleaning up, whitewashing, painting, a month before it. The smell of whitewash was grand. Well a few days before it, they would start putting up the holly. A woman used to make red roses from paper. She would put some wire at the bottom and put them on the holly, then the chains with lanterns, also paper mottos they were called. On these would be wrote ‘What is home without a mother’, ‘Merry Christmas’ and so on. They would be fancy decorations.

The houses looked grand inside. A few days before the time, the women would go out shopping. If you were dealing in that shop, you would get a Christmas box, tea, sugar, Christmas cake, a glass of whiskey, candle. You won’t get that now. We would make the plum duff, currants, raisins etc., a glass of whiskey, put the pot on the fire to boil, then wrap a flour bag around it to keep the water from getting at it.

The Christmas candle would be lit on Christmas Eve, the youngest child in the house lit it and no other one could go near it when she would light it. We would all be excited wondering what is Santa bringing ….. they were innocent. Now they are only two years old and they don’t believe in him. Christmas Eve would come at last for the party. The doors of the houses would be all open at night. You were welcome to come in. A few neighbours used to come in. They would all sing a song and have a good time. It maybe three o’clock in the morning before they would go. We had a gramophone. Got it at five shillings a month. Six records free. It was called a cylinder, records round like a stout glass. We were the first to bring it to Galway. In my time, I don’t think there was any Christmas tree going.

The country men used to bring in what they called bog dule, put it down on the fire (yule log). It would blaze up like petrol. Before the pubs close, the men would bring home a crock of porter. Eight pints up on their shoulder they would carry. They would sing ‘Show me the way to go home’. Many a one got broke as some of them would be well drunk. At that time, the pint was only two pence, a bottle of whiskey two shillings and a bottle of firewater (poteen) the same. If the people that had died came back to see what it cost now, I think they would go back to their grave to rest.

We would go around with the mummers Christmas Eve blacking our faces with soot. We would get a few pence. We would go to Hill’s shop in Dominick Street, get a box of fireworks for a penny, set a match to the fuse, they would bang and make different colours.

Christmas day would come on, plenty to eat and drink. It was a day for rest. Only the mother had to keep going. We would visit the houses, then get a glass of raspberry and Christmas cake. Stephen’s morning, we would go around with the wren. The cage would be all dressed with ivy and chain paper. When we would have the few pence collected for the wren and mummers we would go up to Baggy Dwyer where Griffin’s Cake Shop is. We would have a pot of tea with cakes. He had bunbing slots. There was a glass on top wider than a pint measure. You would put in a halfpenny, hit the nob, the dice would jump up. If you turned up seven, you would get a lemonade and a bun. They were the good times”.

Our photograph today was not taken at Christmas time, but it would give you an idea of how the residents of the Claddagh might dress up and decorate their houses for a special occasion with garlands and evergreens and holly. It was taken on the day the statue of 'Our Lady of Galway' was installed in the Dominican Church, May 22nd, 1922 and shows Folan's house on Fairhill. Included in the photograph are, from the left, Julia Mannion, Molly, Annie, Willy, Julia, Aggie and their mother Mrs. Folan.