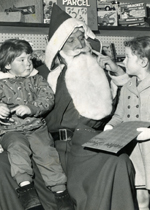 It was Leonard Martin’s idea to bring Santa Claus to Galway for the first time when he introduced him to his shop in Mainguard Street. It was such a novelty that the mayor, Joe Costelloe came formally to the shop to welcome Santa and shake his hand. Leonard Martin’s shop (where St. Anthony’s Credit Union is today) opened in 1941. For most of the year it was largely a hardware shop by at Christmas it became a toyshop exclusively. The man who played Santa Claus was a war veteran named Jack Kerr.

In the 1920’s, Galway had its own toy factory, Hunters, which sold product all over Ireland and exported to the UK. They specialises in hobby horses but also made dolls and teddy bears and other types of toys. In those days, the Christmas season began about the 8th of December, pictures of Santa were place in shop windows and drew admiring crowds of children.

Another shop like Martins was Glynns of William Street, a leading shop for souvenirs, stationery, fancy goods, china and glassware, cutlery, travel goods, jewellery and lots of other items. It was a beautiful shop but all that stuff was incidental. It was the stairs that interested me, climbing that wide staircase of dark wood with a turn half way up was like going up to toy heaven, it led to a wonderland of the imagination, especially at Christmas, a magic place full of colour and all sorts of toys, decorations and balloons. The wall opposite the stairs had every conceivable kind of board game, Meccano, compendiums, jigsaws, easels, paints & colouring pencils, and Christmas annuals stacked along another wall.

It was pristine and always noisy with the sounds of bugles and drums and bells and whistles, and somehow it smelt different. Around the corner to the right were the big toys, the ones you could dream of ... pedal cars, cranes, tanks and forts with cowboys and Indians, castles with knights on horseback. Against the wall at the back was a counter with all kinds of ‘stocking fillers’, small but very desirabale.

Over on the left hand corner was an area that for me was a no-go area, full of walkie-talkie dolls, lace, teddy bears, golliwogs, brush & comb sets, tea sets, prams, babies bottles, nurse’s uniforms, doll’s houses, books with cardboard dolls & cut-out dresses & hats, skates, cots, ribbons, and girlie things. We macho men were reared on a diet of bows and arrows, swords, rifles and holsters and cowboy hats.

You never knew where Santa’s cave would be because he kept moving it around, but it was always there. Somehow he always knew your name, which chimney in your house to go down and he never failed to give you a lucky bag that was different from everyone else’s. It was then that the real countdown and the real anticipation began, you had to be a good boy from then on, go to bed early etc. Occasionally, your parents would mysteriously disappear while you were in the queue.

Toys were real toys then, the nearest thing to a computer you might find was an abacus. 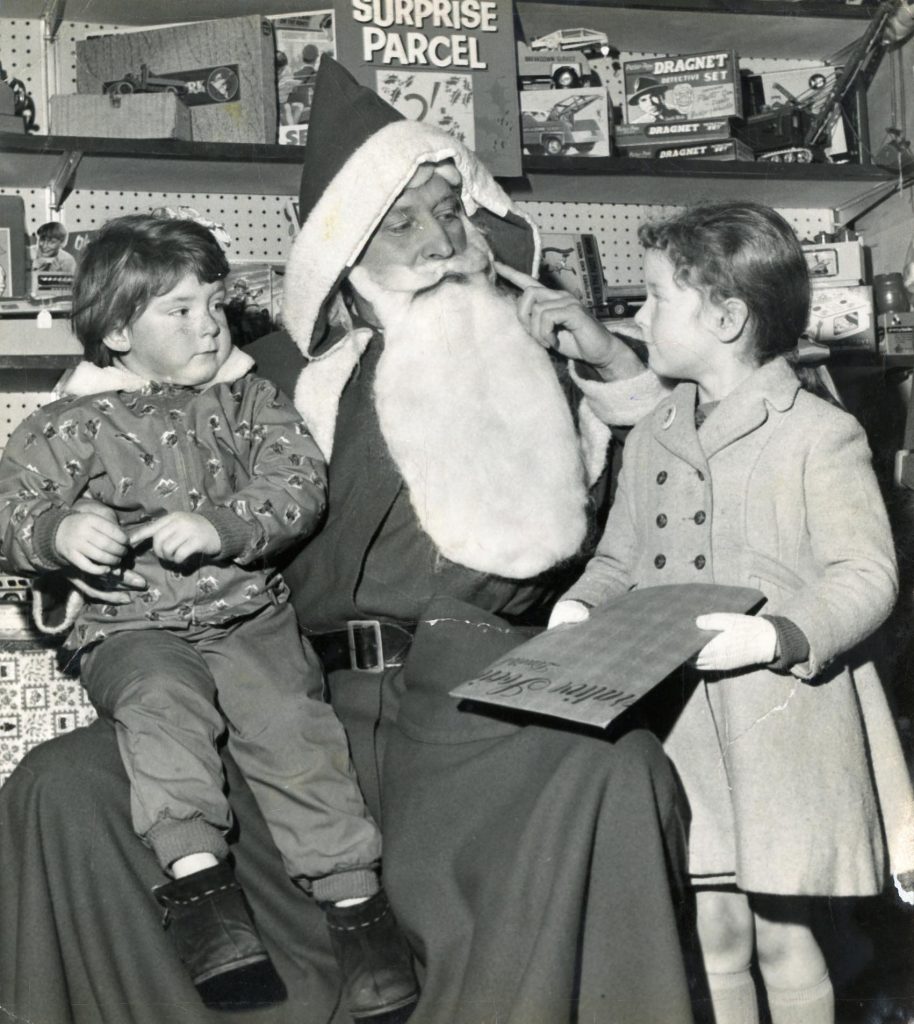