Home » History » Soviet Fates and Lost Alternatives: From Stalinism to the New Cold War
13%OFF 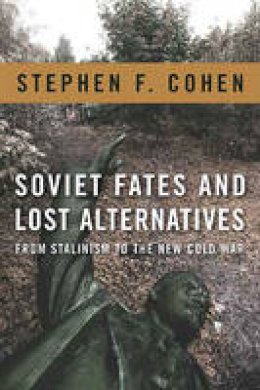 Soviet Fates and Lost Alternatives: From Stalinism to the New Cold War

Description for Soviet Fates and Lost Alternatives: From Stalinism to the New Cold War Paperback. Num Pages: 328 pages. BIC Classification: 1DVUA; 1KBB; HBJD; HBLW3; JPB. Category: (P) Professional & Vocational. Dimension: 226 x 154 x 20. Weight in Grams: 496. From Stalinism to the New Cold War. 328 pages. Cateogry: (P) Professional & Vocational. BIC Classification: 1DVUA; 1KBB; HBJD; HBLW3; JPB. Dimension: 226 x 154 x 20. Weight: 496.
In this wide-ranging and acclaimed book, Stephen F. Cohen challenges conventional wisdom about the course of Soviet and post-Soviet history. Reexamining leaders from Nikolai Bukharin, Stalin's preeminent opponent, and Nikita Khrushchev to Mikhail Gorbachev and his rival Yegor Ligachev, Cohen shows that their defeated policies were viable alternatives and that their tragic personal fates shaped the Soviet Union and Russia today. Cohen's ramifying arguments include that Stalinism was not the predetermined outcome of the Communist Revolution; that the Soviet Union was reformable and its breakup avoidable; and that the opportunity for a real post-Cold War relationship with Russia was squandered ... Read morein Washington, not in Moscow. This is revisionist history at its best, compelling readers to rethink fateful events of the twentieth and early twenty-first centuries and the possibilities ahead. In his new epilogue, Cohen expands his analysis of U.S. policy toward post-Soviet Russia, tracing its development in the Clinton and Obama administrations and pointing to its initiation of a new Cold War that, he implies, has led to a fateful confrontation over Ukraine. Show Less

About Stephen F. Cohen
Stephen F. Cohen is professor of Russian studies at New York University and professor of politics emeritus at Princeton University. His other books include Bukharin and the Bolshevik Revolution: A Political Biography; Rethinking the Soviet Experience; and Failed Crusade: America and the Tragedy of Post-Communist Russia.

Reviews for Soviet Fates and Lost Alternatives: From Stalinism to the New Cold War
Cohen offers us a lesson, and a solution that is at once simple and of priceless value.
David A. Andelman World Policy Blog [George] Kennan's understanding of the Russian state... has proved to have enormous currency over time. Cohen's views should be given similar credence.
William W. Finan Jr. Current History Provocative and insightful.
Amy Knight New ... Read moreYork Review of Books Well written and vigorously argued.
Archie Brown Russian Review Cohen... brings his study of Soviet and Russian political developments to the doorstep of the White House, to powerful effect. The Nation An extraordinarily rich book... an absolutely vital beginning point for anyone interested in a serious study of political and foreign policy developments involving Russia. Slavic Review Soviet Fates and Lost Alternatives finds its stride in Cohen's ability to challenge conventional wisdom on the causes and consequences of major turning points in Soviet and post-Soviet history.
Rehanna Jones-Boutaleb Foreign Policy in Focus this is one of the first books I would put into the hands of someone who wanted to get a good sense of what the Soviet Union was all about.
Lars T. Lih Montreal Review Cohen's book is a superbly informed, astute and thought-provoking analysis of late Soviet politics and history.
Denis Kozlov Slavonic and East European Review Among the many strengths of Soviet Fates is not just Stephen Cohen's longtimedepth of expertise but his unrivalled storytelling ability and, perhaps above all, hisrazor-sharp insider observations based on personal exchanges, interviews, and experienceswith key actors...
Nanci Adler Journal of Modern History Show Less

Goodreads reviews for Soviet Fates and Lost Alternatives: From Stalinism to the New Cold War