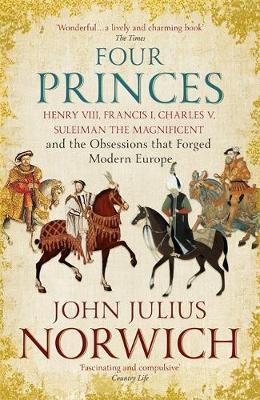 Description for Four Princes Paperback. The colourful story of the four very different men who created our modern world: Henry VIII, Francis I of France, Charles V of Spain and Suleiman the Magnificent: popular history at its best from John Julius Norwich Num Pages: 304 pages. BIC Classification: 1D; 3JB; BGH; HBJD; HBLH. Category: (G) General (US: Trade). Dimension: 198 x 129. .
'Never before had the world seen four such giants co-existing. Sometimes friends, more often enemies, always rivals, these four men together held Europe in the hollow of their hands.' Four great princes - Henry VIII of England, Francis I of France, Charles V of Spain and Suleiman the Magnificent - were born within a single decade. Each looms large in his country's history and, in this book, John Julius Norwich broadens the scope and shows how, against the rich background of the Renaissance and destruction of the Reformation, their wary obsession with one another laid the ... Read morefoundations for modern Europe. Individually, each man could hardly have been more different -- from the scandals of Henry's six wives to Charles's monasticism - but, together, they dominated the world stage. From the Field of the Cloth of Gold, a pageant of jousting, feasting and general carousing so lavish that it nearly bankrupted both France and England, to Suleiman's celebratory pyramid of 2,000 human heads (including those of seven Hungarian bishops) after the battle of Mohacs; from Anne Boleyn's six-fingered hand (a potential sign of witchcraft) that had the pious nervously crossing themselves to the real story of the Maltese falcon, Four Princes is history at its vivid, entertaining best. With a cast list that extends from Leonardo da Vinci to Barbarossa, and from Joanna the Mad to le roi grand-nez, John Julius Norwich offers the perfect guide to the most colourful century the world has ever known and brings the past to unforgettable life. Show Less

About Julius Norwich, John
After National Service, John Julius Norwich (1929-2018) took a degree in French and Russian at New College, Oxford. In 1952 he joined the Foreign Service serving at the embassies in Belgrade and Beirut and with the British Delegation to the Disarmament Conference at Geneva. His publications include The Normans in Sicily; Mount Athos (with Reresby Sitwell); Sahara; The Architecture of ... Read moreSouthern England; Glyndebourne; and A History of Venice. He was also the author of a three-volume history of the Byzantine Empire. He wrote and presented some thirty historical documentaries for television, and was a regular lecturer on Venice and numerous other subjects. Lord Norwich was chairman of the Venice in Peril Fund, Co-chairman of the World Monuments Fund and a former member of the Executive Committee of the National Trust. He was a Fellow of the Royal Society of Literature, the Royal Geographical Society and the Society of Antiquaries, and a Commendatore of the Ordine al Merito della Repubblica Italiana. He was made a CVO in 1993. Show Less

Reviews for Four Princes
Norwich made a brilliant decision to study them as an interacting quartet, rather than individually, for only in this way can one begin to understand how great events and great personalities were hopelessly entangled . . . charming
Sunday Telegraph
What makes this such a compelling read is that the author seasons his erudition with a sharp eye ... Read morefor the quirky fact and the sardonic comment . . . a fascinating and compulsive story
John Ure
Country Life
Packed with extraordinary figures - not just the four princes, but artists and emperors too . . . a warm, witty and fascinating look at how such dynamic individuals shaped the Renaissance and the Reformation right across Europe throughout the sixteenth century
History Revealed
Scholarly and entertaining . . . This book provides a vivid and compelling picture of this turbulent century
BBC History Magazine
With characteristic deftness of touch, Norwich brings each character vividly to life and skilfully weaves their stories together . . . Norwich introduces a dazzling cast of characters: from Leonardo da Vinci to Martin Luther, Joanna the Mad to Anne Boleyn . . . the portrayal feels entirely fresh and enables the reader to gain new insights into some of history's most familiar characters. It is a genuinely inspired idea for a book, and Norwich executes it with typical aplomb
Tracy Borman
BBC History Magazine
Wonderful . . . This was indeed a glorious age and Norwich has made a brilliant decision to study four idiosyncratic rulers as an interacting quartet rather than separately . . . A lively and charming book
THE TIMES
Show Less