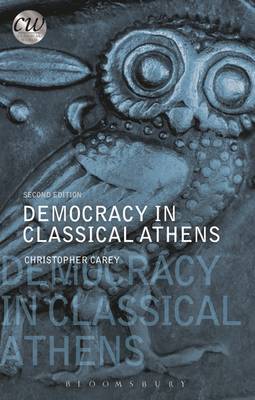 Description for Democracy in Classical Athens (Classical World) Paperback. Series: Classical World. Num Pages: 200 pages, 21 bw illus. BIC Classification: 1QDAG; 3D; HBJD; HBLA1; JPHV. Category: (G) General (US: Trade). Dimension: 219 x 138 x 24. Weight in Grams: 270.
For two centuries classical Athens enjoyed almost uninterrupted democratic government. This was not a parliamentary democracy of the modern sort but a direct democracy in which all citizens were free to participate in the business of government. Throughout this period Athens was the cultural centre of Greece and one of the major Greek powers. This book traces the development and operation of the political system and explores its underlying principles. Christopher Carey assesses the ancient sources of the history of Athenian democracy and evaluates criticisms of the system, ancient and modern. He also provides a virtual tour of the political ... Read morecityscape of ancient Athens, describing the main political sites and structures, including the theatre. With a new chapter covering religion in the democratic city, this second edition benefits from updates throughout that incorporate the latest research and recent archaeological findings in Athens. A clearer structure and layout make the book more accessible to students, as do extra images and maps along with a timeline of key events. Show Less

Reviews for Democracy in Classical Athens (Classical World)
A student-friendly text that draws from the author's deep well of knowledge. Carey has concisely presented the key evidence for the development, function, and ideology of Athenian democracy alongside his lucid interpretations. DCA strikes a balance both between a synchronic and diachronic view of Athenian democracy and between principles and institutions, a challenging achievement for a student handbook. Carey does ... Read morean impressive job compressing the relevant information into a slim volume while providing enough commentary for undergraduates with little Classics or History background ... The new, more thoroughly explained and functional DCA fills a general need for lower-and intermediate-level courses on Athenian democracy, democracies ancient and modern, Greek history, and Greek political thought.
Bryn Mawr Classical Review
Show Less