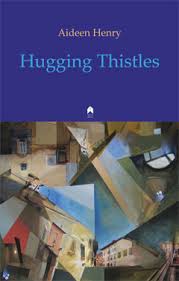 There is, in picking up a debut collection of short stories, especially when the author is unknown to you, a sense of a new beginning, a sort of tingling not to say exciting anticipation of discovery mixed with the fear of disappointment that this new author may have been published too early and that the stories will fail to touch any chord. Picking up Aideen Henry’s first collection, just published by Arlen House, the title “Hugging Thistles” adds to this sense of apprehension as do the intriguing cover images by Angela O’Brien and Helen Caird respectively and the general feeling opening the book is “Reader tread softly, for you tread on my dreams” with the hinted sequel, “God help you if you do”.

This sense of uncertainty, of probing, of searching, of looking for a rhythm, continues into the second story as though the author was somewhat uneasy or lacking in confidence, a young colt trying to find its feet. “Her trips out of town started on her free days. She felt herself led by the hand by that other part of her, accompanied to and from each town by it, but never clear on the purpose of any journey”. Toward s the end of the story however, the atmosphere changes with a growing sense of something resolved and it finishes with the words “....as Saibh comes into the room smiling”.

Then, the first sentence of the third story reads: “Úna slams the fridge door”. Suddenly the narrative is imbued with a whole new energy. The colt has found its feet and is gambolling around the meadow with a vengeance. It’s as if the author has just woken up and realised that yes, she can write and yes she definitely has something to say. The narrative voice of this, and the following stories, is more confident, warm and humane. There is a tremendous empathy for the situation faced by the story’s protagonist but the real magic is how the author resolves the potential catastrophe and the surprisingly warm and tender ending to the story. Now, as my daughter would have it, “we’re sucking diesel!”

This third story “Deadlights” sets the tone for the rest of the book. Now we have a young writer supremely confident in her craft and setting out not just to enjoy herself but also to entertain her audience and this Henry does with panache and style.

Despite the fact that most of the stories in the book have a dark side to them, there is also present in all of them a celebration of human resilience and its ability to overcome the most potentially tragic of situations. This is achieved sometimes by a neat dab of commonsense, sometimes by a wee touch of wisdom but always imbued with a deep humanity that is obviously the writer’s trademark.

As a first collection “Hugging Thistles” does not disappoint, in fact it often exhilarates and, more important, it introduces a bright new writer on to the Galway literary scene and, hopefully, one who will be with us for a long time to come.