Of Magdalens and Poets 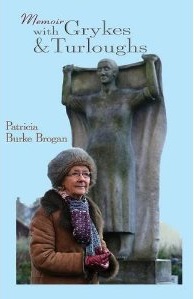 It is difficult for an increasing section of the Irish population to visualise the utter power wielded by the Catholic Church in Ireland prior to the mid-sixties. The law of the country was dictated not by the Taoiseach and Ministers up in Dáil Eireann but by the Bishops and Priests from the Sunday morning pulpit.

What is even more remarkable is that despite the inherent hypocrisy of a number of the Catholic clergy of the period and the casual cruelties inflicted by them on the weaker sections of society in the name of a Loving Christ the significant number of that generation who are still deeply religious and who retain within themselves a natural and down to earth spirituality.

Patricia Burke Brogan’s book “Memoir With Grykes & Turloughs” recently published by Wordsonthestreet bears witness both to the stark realities of the period as well as to the resilience and strength of those few who had the courage to stand up and call stop, this at a time that to do so was to invite severe censure to the point of being totally ostracized by family and friends.

The book consists of a series of short autobiographical essays beginning in a national school in Ballinderreen and finishing in Ougteragh Co Leitrim and the words “Meshed in our winter-dead hedge,/ a nest of starlings/hums young with music,/burnishes my life”. The narrative voice of the book is more orchestral than sequential as Brogan revisits scenes of a long and varied life apparently at random the kernel of which is the cathartic day when shortly after entering the convent as a young novice she finds herself in the Magdalen Laundry in Galway.

Totally horrified at what she was witnessing and in the spirit of the loving Jesus to whom she had dedicated her life she reached out a helping hand to the poor unfortunates incarcerated there only to be severely reprimanded by an extremely angry superior who told her that under no circumstances was she to communicate with these creatures. It was at this point that Patricia Burke Brogan discovered her true vocation.

Shortly afterwards she left the convent, began a long and arduous journey in finding her true self through her writing and painting with the ultimate goal of ensuring that the fate of the ”Magdalens” was not swept under the carpet or buried in unmarked graveyards. When, on the 14th of February 1992 in a converted garage near the Spanish Arch in Galway City her play “Eclipsed” opened, she went a long way to achieving just that.

As noted before the narration consists of a series of flashbacks mixed in with a straight forward narrative. From the outset there is mixed with an intense joy in teaching whether this is in the classroom teaching art or through her canvasses and creative poetry. Overhanging all this though is the dark shadow of the Magdalen experience.

In the initial stages Brogan seems to find it somewhat difficult to deal with this but finds the necessary strength to do this through her father’s example and influence. His presence is constant throughout the text and in a chapter entitled “Sinn Fein The Old IRA we are given a full description of his activities during which he was captured by the Auxiliaries and sentenced to death. He was released on the night the Treaty was signed. When he returned to his Brigade in North Roscommon he found that it had been infiltrated by political opportunists and in disgust he walked out the door never to return.

It was a similar resilience that enabled Brogan to give the Magdalens a voice in her play “Eclipsed” which has gained a national and international reputation, bear the insults and even personal threats that ensued while remaining a devout Catholic.

“Memoir With Grykes & Turloughs” is an extraordinary achievement not only for its honesty and sincerity but also for its total lack of bitterness.