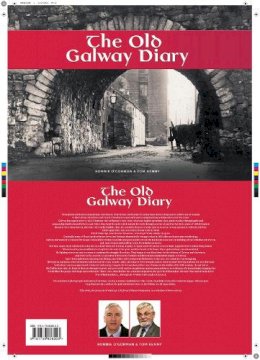 Description for The Old Galway Diary Hardback. Through the medium of photography and history, Tom Kenny and Ronnie O’Gorman have been telling stories of their native Galway in the Galway Advertiser each week. It has been a successful and a complimentary collaboration over the years. Galway has a great story to tell. A harbour-city on Europe’s west coast, where an English merchant class, made wealthy through guile and seamanship, built a beautiful town; and where they kept the native Irish outside its walls through a series of punitive bye-laws, some of which insisted the men were clean-shaven, that they only spoke English, that they needed a license to trade, and were never to wear garments ‘coloured saffron’, which apparently was a favourite colour with the Irish. The O’Flahertys, described as ‘ferocious,’ were kept firmly outside its gates. Gradually many of these barriers broke down, but fortunes dramatically changed when in 1652, after an heroic nine-month siege, Galway surrendered to Cromwell’s troops. Colonel Peter Stubbers and his men proceeded to wreck the handsome stone-carved buildings, drive Catholics out of town, and send women and children to the West Indies as slaves. The next major crisis followed less that 40 years later when the citizens, hoping to regain some of Galway’s lost fortune, supported the Catholic King James. When his army was annihilated at Aughrim, the roar of the guns could be heard in the town. Once again Galway was emasculated. Its fighting men were sent overseas to continue the struggle elsewhere. Thus began a very bleak time for the citizens of Galway and elsewhere, only relieved by a secret co-operation between the Catholic and Protestant communities unique to Galway. Apart from subsistence farming and fishing, one of the really prosperous businesses in the next two centuries was smuggling. Through an ingenious series of tunnels and holes in the walls, brandy, silks, and tobacco were brought ashore, while its once thriving harbour fell into disrepair. Yet Galway’s story is spiced with character and energy. Despite the devastation of the Great Famine in the middle of the 19th century, the arrival of the Dublin train into the heart of the town brought tourists and new hotels and for one glorious madcap moment there were dreams of a transatlantic shipping line which filled the people with hope and excitement. There were other battles too: constant emigration, the growth of Fenianism, the Land War and ultimately the War of Independence… through all of which Galway played its part. The selection of photographs and stories from those weekly columns republished in this volume hopefully invites the reader to engage with our past, to go back in time, and see the path which has led us to the Galway we all enjoy today. This book, the proceeds of which go to Galway’s Simon Community, is a selection of those stories

Reviews for The Old Galway Diary