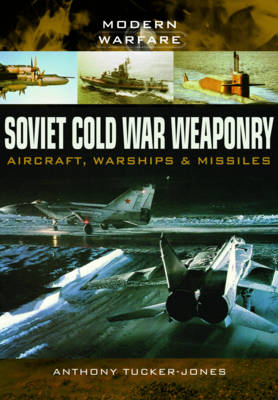 Description for Soviet Cold War Weaponry: Aircraft, Warships and Missiles (Modern Warfare) Paperback. A photographic history of Soviet Cold War weaponry from the 1950s to 1980s. Num Pages: 160 pages, 200 illustrations, colour and black and white. BIC Classification: 1DVU; 3JJP; HBTW; HBWS; JWMC; JWMV. Category: (G) General (US: Trade). Dimension: 260 x 190 x 10. Weight in Grams: 456.
In this companion volume to his photographic history of Soviet tanks and armoured vehicles, Anthony Tucker-Jones provides a visual guide to the vast array of aircraft, warships and missiles the Soviet armed forces deployed at the height of the Cold War. Although the superpowers never came to blows, the so-called 'Cold War' was far from cold, with numerous 'hot' proxy wars being fought in Africa and the Middle East. All these conflicts employed Soviet weaponry which has been captured in action in the colour and black-and-white photographs selected for this book. Between the 1950s and 1980s Soviet and Warsaw Pact ... Read morecountries churned out thousands of weapons ready for the Third World War. They also embarked on a technological arms race with NATO in an attempt to counter each new piece of equipment as it appeared. The MiG fighters, the Badger and Backfire bombers, the nuclear submarines have achieved almost iconic status, but, as Anthony Tucker-Jones's book shows, there was much more to the Soviet armoury than these famous weapons. Much of it, despite its age, remains in service with armies, guerrilla forces and terrorist organizations around the world today. Show Less

About Tucker-Jones, Anthony
Anthony Tucker-Jones is a former Defence Intelligence Officer and a widely published expert on regional conflicts and counter-terrorism. He is author of over a dozen books including the Rise of Militant Islam and is security and terrorism correspondent for intersec - The Journal of International Security. He has freelanced for Channel 4 News and writes regular analysis for Defencemanagement.com ... Read moreand Publicserviceeurope.com. He holds an MA in International Relations and Strategic Studies. For further information his website can be found at www.atuckerjones.com. Show Less