Home » Other Categories » Individual composers & Music & Entertainment » Queen Unseen: My Life with the Greatest Rock Band of the 20th Century
7%OFF 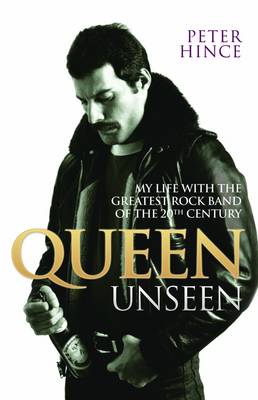 Queen Unseen: My Life with the Greatest Rock Band of the 20th Century

Description for Queen Unseen: My Life with the Greatest Rock Band of the 20th Century Paperback. In an intimate and eye-opening story, roundly praised as the best available insight on Queen, Peter Hince recounts twelve years on the road with Freddie Mercury, Brian May and co. This truly is the definitive book on the 20th century's most iconic rock band. Num Pages: 336 pages. BIC Classification: AVGP; AVH; BGFA. Category: (G) General (US: Trade). Dimension: 200 x 130 x 26. Weight in Grams: 278.
Imagine being alongside one of the greatest bands in the history of rock, touring the world and being there as they perform at some of the best and biggest music venues in the world. Peter Hince didn't have to imagine: for more than a decade, he lived a life that other people can only dream of as he worked with Queen as head of their road crew. In 1973, Queen was the support act for Mott the Hoople, for whom Peter was a roadie. Back then, Queen had to content themselves with being second on the bill and the ... Read moreworld had not yet woken up to the flamboyant talent of Freddie Mercury. Peter started working full time for Queen just as they were making A Night at the Opera, the album which catapulted them to international stardom. In this intimate and affectionate book, Peter recalls the highlights of his years with the band. He was with Freddie when he composed 'Crazy Little Thing Called Love'; he was responsible for making sure that Freddie's stage performances went without a hitch - and was often there to witness his famed tantrums! He was also party to the sex, drugs and rock 'n' roll which are invariably part of life on the road with a rock band. Show Less

About Peter Hince
This paperback edition of Queen Unseen has been revised, edited and includes new stories and anecdotes. The original hardback, published in 2011 was critically acclaimed and published in many other territories and languages. Queen Unseen is a personal account of the many exciting years as a young man I spent on tour, in the recording studio, on video shoots ... Read moreand day to day life with one of the world's biggest and best ever rock bands. Insightful, enlightening and mostly a humorous account, it's for anybody who has ever wondered what working for Queen, or most rock bands of the 1970s & 1980s really entailed... It is not a chronological history or definitive biography of the band, but a first-hand story of spending your youth travelling the world and living the rock and roll lifestyle - to the full! Sex and drugs and rock and roll? Yes. I make observations and comments about all the fantastic places we visited and played, and what it was like living, at times, a crazy and surreal existence - with the highs and the lows. The book covers Queen's working life, during my time as the band's longest serving roadie and head of their crew. With new material and surprises for Queen fans, it is also a book to interest anybody who likes stories of the rock and roll lifestyle. I hope you will join me on an Access All Areas journey through a magical era when we were young; feeling we could take on the world and win. Invariably we did. Show Less

Reviews for Queen Unseen: My Life with the Greatest Rock Band of the 20th Century
'Will satisfy the curiosity of anyone wanting to know what it was really like to work with a famous rock band' - MOJO

Goodreads reviews for Queen Unseen: My Life with the Greatest Rock Band of the 20th Century