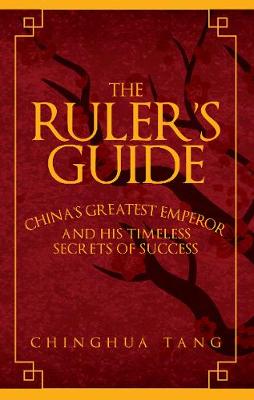 The Ruler's Guide: China's Greatest Emperor and His Timeless Secrets of Success

Description for The Ruler's Guide: China's Greatest Emperor and His Timeless Secrets of Success Hardcover. The wisdom of China's greatest emperor brought to an English audience for the first time BIC Classification: 1FPC; HBJF. Category: (G) General (US: Trade). Dimension: 134 x 205 x 19. Weight in Grams: 244.
In the classic tradition of Sun Tzu's The Art of War, here for the first time in English is the timeless wisdom of China's greatest emperor Tang Taizong (598-649 AD), which is still being studied more than 1300 years later as an invaluable guide to leading and managing. Tang Taizong is arguably the greatest Emperor in Chinese history. In Asia, many historians rank him with such rulers as Augustus and Napoleon. When he founded the Tang dynasty, Taizong was only twenty-eight years old. Ultimately, he would open up the Silk Road, create a golden age of prosperity ... Read moreand culture, preside over a society in which women enjoyed higher status, and allow Christianity and Islam into China for the first time. His dynasty would last 300 years. Author Chinghua Tang presents conversations between Taizong and his gifted advisers that reveal how to appraise oneself and others, how to enhance organisational effectiveness, how to grow power and influence without losing the respect of others, and how to craft one's legacy. The Ruler's Guide reveals how Taizong's wisdom is a match for today's fastpaced, ever changing world. Show Less

About Chinghua Tang
Chinghua Tang grew up during Mao's violent Cultural Revolution and was only able to make it to the West in 1980 when he won the BBC World Service English Competition. That accomplishment brought him to England where he studied at the LSE. Subsequently, he traveled to the U.S. and became the first citizen of the People's Republic to earn an ... Read moreMBA from Harvard's Business School. Chinghua has authored four books in Chinese: a memoir of his time at Harvard, two books on investing, and 'A Treasury of China's Wisdom'. Show Less

Reviews for The Ruler's Guide: China's Greatest Emperor and His Timeless Secrets of Success
Deep, dazzling, and destined to be a long bestseller ... This is the best book of its kind since Sun Tzu's The Art of War. The Ruler's Guide is a little masterpiece, ancient in its origin but full of wisdom for the 21st century.
Dan Rather, former anchor of CBS News and multiple Emmy and Peabody Award Winner This ... Read morebrilliantly presented book is a jewel. The governing principles of one of history's most accomplished rulers and China's golden age emperor have never been seen in English - until now. And the intervening centuries have only validated the philosophy of Tang Taizong. You will be lifted and inspired by the elegant simplicity.
Jon Huntsman, Jr, 2012 presidential candidate, former Ambassador to China The Ruler's Guide has much to pass on to us, not the least of which is an explanation of the Chinese understanding of virtues, which gives us much to consider about how virtues, rather than harsh laws, make a vibrant society.
James Webb, former US Senator and author of The Emperor's General Riveting and powerful insights on leadership. It's worth reading for the boardroom or in combat.
Barry R. McCaffrey, former US Army Four-Star General, CiC US Southern Command Show Less

Goodreads reviews for The Ruler's Guide: China's Greatest Emperor and His Timeless Secrets of Success