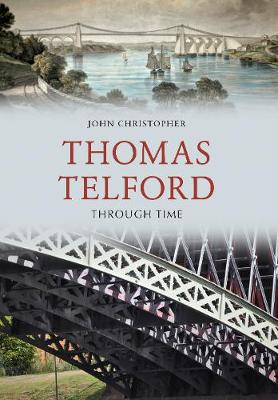 Description for Thomas Telford Through Time Paperback. This fascinating selection of images records the works of the pre-Victorian engineer Thomas Telford and what remains of the great roads, canals and bridges he built in Scotland, England and Wales. Series: Through Time. Num Pages: 96 pages, 180. BIC Classification: 1DBKE; 1DBKS; 1DBKW; HBTK; WQH; WQP. Category: (G) General (US: Trade). Dimension: 236 x 166 x 9. Weight in Grams: 300.
Before the emergence of the steam railway rocketed the likes of Isambard Kingdom Brunel and Robert Stephenson - the great Victorian engineers - into the limelight, there was a `Colossus' who dominated the engineering scene and laid the foundations for what was to follow. Thomas Telford built a series of ambitious road and canal projects, as well as many notable bridges - including the ground-breaking Menai Suspension Bridge - numerous harbour works and buildings. Contrasting old and new images, John Christopher examines Telford's principal works to highlight his diverse, but often overshadowed, achievements. These include not only ... Read morethe Menai bridge, of course, but also the other masonry and iron bridges, the Ellesmere Canal with its aqueducts at Pontcysyllte and Chirk, the Caledonian Canal slicing though Scotland's Great Glen, and the A5 road running between London and Holyhead. Show Less

About John Christopher
John Christopher has written and edited a number of books on Engineering, Military History and Railway and Road Transport, specializing in the life and works of Isambard Kingdom Brunel and being the series editor for Amberley's Bradshaw's Guides series. He has also appeared in Michael Portillo's Great British Railway Journeys television series. In between writing books, he is a balloon ... Read morepilot and Land Rover fan. He lives in Gloucestershire. Show Less

Reviews for Thomas Telford Through Time