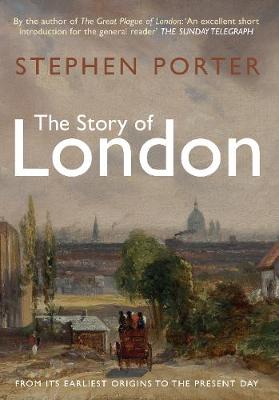 The Story of London

Description for The Story of London Paperback. A short illustrated history of London from Roman Londinium to the global city of today Num Pages: 96 pages, 75. BIC Classification: 1DBKESL; WQH. Category: (G) General (US: Trade). Dimension: 235 x 165. .
From its foundation by the Romans in the middle of the first century and its revival under Alfred the Great in the late ninth century, London grew and flourished. It prospered as a trading city, as well as the centre of government and the foremost economic and cultural force within Britain, and developed a global influence as the capital of a worldwide empire and one of the world's leading cities. Yet its history was punctuated by devastating epidemics and fires, periods of depression as well as prosperity, and dramatic political events. This concise history, illustrated with over sixty colour pictures, ... Read moretraces the fascinating and sometimes turbulent history of Britain's greatest city. Show Less

About Stephen Porter
Stephen Porter is an acknowledged expert on London's history. His other books include The Great Plague (`An excellent introduction' Sunday Telegraph), London: A History in Paintings & Illustrations ('Glorious... brings London vividly to life' Simon Jenkins) & Pepys's London ('A compelling, lively account' BBC History Magazine). He is a Fellow of the Society of Antiquaries and of the Royal Historical ... Read moreSociety. After twenty-five years living in the capital he now lives in Stratford-Upon-Avon. Show Less

Reviews for The Story of London

Goodreads reviews for The Story of London