Home » Literature » Essays on Music
13%OFF 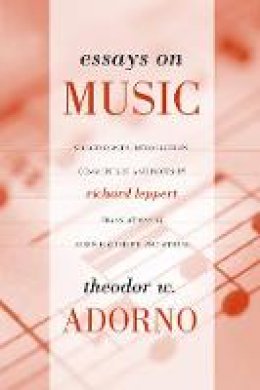 About Adorno, Theodor W.
Richard Leppert is Samuel Russell Distinguished Professor of Humanities and Morse Alumni Distinguished Teaching Professor in the Department of Cultural Studies and Comparative Literature at the University of Minnesota. His previous books include Art and the Committed Eye: The Cultural Functions of Imagery (1996) and The Sight of Sound: Music, Representation, and the History of the Body (California, 1993).

Reviews for Essays on Music
A book of landmark importance. It is unprecedented in its design: a brilliantly selected group of essays on music coupled with lucid, deeply incisive, and in every way masterly analysis of Adorno's thinking about music. No one who studies Adorno and music will be able to dispense with it; and if they can afford only one book on Adorno and ... Read moremusic, this will be the one. For in miniature, it contains everything one needs: a collection of exceptionally important writings on all the principal aspects of music and musical life with which Adorno dealt; totally reliable scholarship; and powerfully illuminating commentary that will help readers at all levels read and re-read the essays in question. -Rose Rosengard Subotnik, author of Deconstructive Variations: Music and Reason in Western Society Show Less

Goodreads reviews for Essays on Music