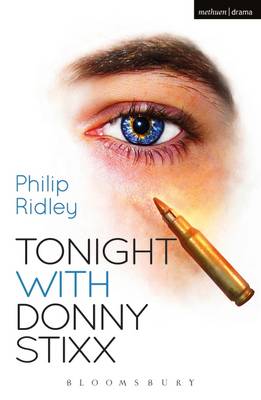 Description for Tonight With Donny Stixx (Modern Plays) Paperback. Series: Modern Plays. Num Pages: 56 pages, black & white illustrations. BIC Classification: DD. Category: (P) Professional & Vocational. Dimension: 131 x 198 x 14. Weight in Grams: 64.
It's at times like this I'm inspired by The Stupendous Santini. He toured the mid-West during the 1930s, entertaining farmers affected by the Dust Bowl. No one would have remembered him were in not for the fact that during his most famous trick - sword swallowing - he accidentally punctured a lung and died on the spot. He became a legend. Donny has committed an act that shocked everyone. Tabloids called him The Most Hated Boy Alive. But Donny doesn't want forgiveness. All Donny wants is . . . his own television show. ... Read moreWritten by internationally acclaimed writer Philip Ridley, Tonight With Donny Stixx is the companion piece to Ridley's 2013 Fringe First-winner Dark Vanilla Jungle, and received its premiere at the Soho Theatre, London, on 27 July 2015 before premiering at the Edinburgh Festival Fringe. Show Less

About Philip Ridley
Philip Ridley was born in the East End of London. He studied painting at St Martin's School of Art and his work has been exhibited widely throughout Europe and Japan. As well as three books for adults (Crocodilia, In The Eyes of Mr Fury and Flamingos in Orbit) - and the highly acclaimed screenplay for the The ... Read moreKrays feature film (winner of the Evening Standard Best Film of the Year Award) - he has written eleven adult stage plays: the seminal The Pitchfork Disney, the multi award-winning The Fastest Clock in the Universe, Ghost from a Perfect Place, Vincent River, Mercury Fur, Leaves of Glass, Piranha Heights, Tender Napalm (nominated for the London Fringe Best Play Award), Shivered (nominated Off-West End Best New Play Award), Dark Vanilla Jungle (winner of an Edinburgh Festival Fringe First Award) and Radiant Vermin, plus several plays for young people: Karamazoo, Fairytaleheart, Moonfleece (named as one of the 50 Best Works About Cultural Diversity by the National Centre for Children's Books), Sparkleshark and Brokenville (collectively known as The Storyteller Sequence), and a play for the whole family, Feathers in the Snow (shortlisted for the Brian Way Best Play Award). He has also written books for children, including Scribbleboy (shortlisted for the Carnegie Medal), Kasper in the Glitter (nominated for the Whitbread Prize), Mighty Fizz Chilla (shortlisted for the Blue Peter Book of the Year Award), ZinderZunder, Vinegar Street, Zip's Apollo and the bestseller Krindlekrax (winner of both the Smarties Prize and WH Smith's Mind-Boggling Books Award), the stage play of which - adapted by Ridley himself - was premiered at the Birmingham Rep Theatre in 2002. He has also directed three feature films from his own screenplays: The Reflecting Skin - winner of eleven international awards (including the prestigious George Sadoul Prize) - The Passion of Darkly Noon (winner of the Best Director Prize at the Porto Film Festival) and Heartless (winner of The Silver Meliers Award for Best Fantasy Film). For the latter two films, Philip Ridley co-wrote a number of original songs, one of which, Who Will Love Me Know? (performed by P.J. Harvey), was voted BBC Radio 1's Top Film Song of 1998 and has since been covered by the techno-house band Sunscreem (as Please Save Me), becoming both a club and viral hit. In 2010 Ridley, along with song-writing collaborator Nick Bic?t, formed the music group Dreamskin Cradle and their first album, Songs from Grimm, is available on iTunes, Amazon and all major download sites. Philip Ridley is also a performance artist in his own right, and his highly charged readings of his ongoing poetry sequence Lovesongs for Extinct Creatures (first embarked on when he was a student) have proved increasingly popular in recent years. In 2012 What's On Stage named him a Jubilee Playwright (one of the most influential British writers to have emerged in the past six decades). Philip Ridley has won both the Evening Standard's Most Promising Newcomer to British Film and Most Promising Playwright Awards. The only person ever to receive both prizes. Show Less

Reviews for Tonight With Donny Stixx (Modern Plays)
We need writers such as Ridley to take us to these dark crevasses of experience . . . it all remains with you like a vivid hallucination
Arts Desk
No one captures pain, violence and the misery of love gone wrong quite like Philip Ridley
Daily Telegraph
Ridley, as ever a master of lyrical unpleasantness ... Read more. . . lacerating excruciating theatre, which leaves the audience exhausted and speechless
Evening Standard
Show Less