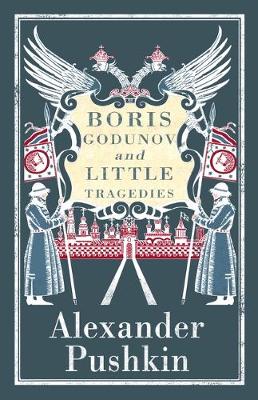 Description for Boris Godunov and Little Tragedies Paperback. A tale of intrigue, deception, murder and retribution, 'Boris Godunov'; charts the rise and fall of an ambitious prince who cannot avoid facing the consequences of his dark past. Translator(s): Clarke, Roger. BIC Classification: 2AGR; DD. Category: (G) General (US: Trade). Dimension: 198 x 128. .
A drama of ambition, murder, remorse and retribution, Boris Godunov charts the decline of a Russian statesman, whose dynastic aims were foiled by a guilty past and an audacious upstart. Based on history and inspired by Shakespeare, Alexander Pushkin's daring masterwork is presented here in its rarely published uncensored version of 1825. Set in Vienna, Flanders, Madrid and London, Pushkin's celebrated Little Tragedies - Mozart and Salieri, The Mean-Spirited Knight, The Stone Guest and A Feast during the Plague - each focus on a protagonist's driving obsession - with status, money, sex or risk-taking - and its ... Read moredevastating consequences. Show Less

About Pushkin, Alexander
Alexander Pushkin (1799-1837) was a dramatist and poet, penning such influential works as Eugene Onegin and Boris Godunov. He is now considered the father of modern Russian literature.