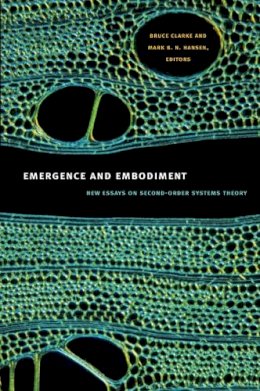 Description for Emergence and Embodiment: New Essays on Second-Order Systems Theory (Science and Cultural Theory) Paperback. Explores the cultural legacy of cybernetics and neocybernetics that offers new insight on the role of the human in an era of the posthuman. Editor(s): Clarke, Bruce; Hansen, Mark B. N. Series: Science & Cultural Theory. Num Pages: 296 pages, 12 figures. BIC Classification: GPFC; UYQ. Category: (P) Professional & Vocational. Dimension: 157 x 232 x 18. Weight in Grams: 440.
Emerging in the 1940s, the first cybernetics-the study of communication and control systems-was mainstreamed under the names artificial intelligence and computer science and taken up by the social sciences, the humanities, and the creative arts. In Emergence and Embodiment, Bruce Clarke and Mark B. N. Hansen focus on cybernetic developments that stem from the second-order turn in the 1970s, when the cyberneticist Heinz von Foerster catalyzed new thinking about the cognitive implications of self-referential systems. The crucial shift he inspired was from first-order cybernetics' attention to homeostasis as a mode of autonomous self-regulation in mechanical and informatic systems, to second-order ... Read moreconcepts of self-organization and autopoiesis in embodied and metabiotic systems. The collection opens with an interview with von Foerster and then traces the lines of neocybernetic thought that have followed from his work.In response to the apparent dissolution of boundaries at work in the contemporary technosciences of emergence, neocybernetics observes that cognitive systems are operationally bounded, semi-autonomous entities coupled with their environments and other systems. Second-order systems theory stresses the recursive complexities of observation, mediation, and communication. Focused on the neocybernetic contributions of von Foerster, Francisco Varela, and Niklas Luhmann, this collection advances theoretical debates about the cultural, philosophical, and literary uses of their ideas. In addition to the interview with von Foerster, Emergence and Embodiment includes essays by Varela and Luhmann. It engages with Humberto Maturana's and Varela's creation of the concept of autopoiesis, Varela's later work on neurophenomenology, and Luhmann's adaptations of autopoiesis to social systems theory. Taken together, these essays illuminate the shared commitments uniting the broader discourse of neocybernetics. Contributors. Linda Brigham, Bruce Clarke, Mark B. N. Hansen, Edgar Landgraf, Ira Livingston, Niklas Luhmann, Hans-Georg Moeller, John Protevi, Michael Schiltz, Evan Thompson, Francisco J. Varela, Cary Wolfe Show Less

About Bruce Clarke
Bruce Clarke is Professor of English at Texas Tech University and a past president of the Society for Literature, Science, and the Arts. His books include Posthuman Metamorphosis: Narrative and Systems and Energy Forms: Allegory and Science in the Era of Classical Thermodynamics. Mark B. N. Hansen is Professor of Literature at Duke University. He is the ... Read moreauthor of New Philosophy for New Media and Bodies in Code: Interfaces with Digital Media. Show Less

Reviews for Emergence and Embodiment: New Essays on Second-Order Systems Theory (Science and Cultural Theory)
Emergence and Embodiment is an outstanding collection of sharp, well-crafted essays by prominent authors in the field of science and literature studies, all of whom have made major contributions to discussions of cybernetics, poststructuralism, and posthumanism. Here they demonstrate the viability of neocybernetics as a resource for resolving the dilemmas of the posthuman raised by newer fields of artificial life, ... Read morecomplexity theory, and cellular automata. -Tim Lenoir, Kimberly J. Jenkins Chair of New Technologies and Society, Duke University Emergence and Embodiment provides a useful overview and detailed analyses of the complex field of neocybernetics and its major thinkers. It indicates the significance and breadth of interdisciplinary work being done in the wake of Humberto Maturana, Francisco Varela, Heinz von Foerster, and George Spencer-Brown, even as it makes demands on its readers to rethink some of their assumptions about he last forty years of 'theory' in the humanities and the interdisciplinary social sciences. -Robert Markley, author of Dying Planet: Mars in Science and the Imagination Show Less