Home » Biography » Éamon de Valera: A Will to Power
50%OFF 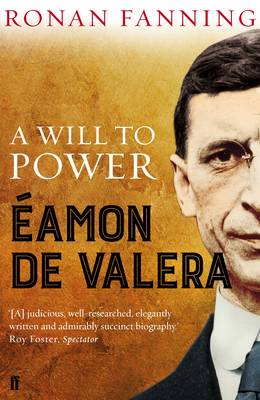 Éamon de Valera: A Will to Power

Description for Éamon de Valera: A Will to Power Paperback.
Eamon de Valera is the most remarkable man in the history of modern Ireland. Much as Churchill personified British resistance to Hitler and de Gaulle personified the freedom of France, de Valera personified Irish independence. From his emergence in the aftermath of the 1916 rebellion as the republican leader, he bestrode Irish politics like a colossus for more than fifty years. On the eve of the centenary of the Irish Revolution, one of Ireland's most eminent historians explains why Eamon de Valera was such a divisive figure that he has never - ... Read moreuntil now - received the recognition he deserves. This biography reconciles an acknowledgement of de Valera's catastrophic failure in 1921-22, when his petulant rejection of the Anglo-Irish Treaty shaped the dimensions of a bloody civil war, with an appreciation of his subsequent greatness as the statesman who single-handedly severed the ties with Britain and defined nationalist Ireland's sense of itself. Show Less

About Ronan Fanning
Ronan Fanning is a Member of the Royal Irish Academy, and Professor Emeritus of Modern History at University College Dublin. Among his books are the definitive history of the Irish Department of Finance and a remarkable biography (co-written with Michael Lillis) of Eliza Lynch, lover of the nineteenth-century Paraguayan dictator Francisco Solano Lopez. More recently, he has been one of ... Read morethe chief editors of the Dictionary of Irish Biography. His powerful new history of Ireland, covering the decade of the Great War and the Easter Rising was pubished by Faber in 2013. Show Less

Reviews for Éamon de Valera: A Will to Power

Goodreads reviews for Éamon de Valera: A Will to Power