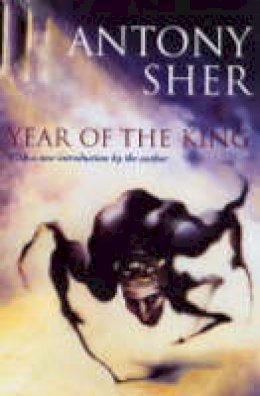 Year of the King

Description for Year of the King Paperback. Antony Sher's stunning performance for the Royal Shakespeare Company as a Richard III on crutches - the so-called 'bottled spider' - won him both the Laurence Olivier and Evening Standard Awards for Best Actor of 1984. This book records - in the actor's own words and drawings - the making of this historic theatrical event. Num Pages: 256 pages, Illustrations. BIC Classification: ANC; APB; DSGS. Category: (G) General (US: Trade). Dimension: 216 x 139 x 21. Weight in Grams: 330.
Other early 'stand-out' roles came in the premieres of Caryl Churchill's Cloud Nine (1979) and Mike Leigh's Goose Pimples (1981). He was Malcolm Bradbury's History Man on TV (1981) before joining the Royal Shakespeare Company in 1982, where he has played a huge variety of leading role in modern plays such as David Edgar's Maydays (1983) and Peter Flannery's Singer (1989) but chiefly in Shakespeare. He was the Fool to Michael Gambon's Lear, a famous Richard III, Shylock, Malvolio, Leontes, Macbeth with Harriet Walter, and, currently, Iago. For the RSC he was also Cyrano and Tamburlaine and the Malcontent. Interspersed ... Read morewith these were appearances at the National Theatre - as Astrov to Ian McKellen's Uncle Vanya, as Stanley Spencer in Pam Gems's play and as Titus Andronicus, which he originated at the Market Theatre, Johannesburg. In October 2004 he will appear at the National again in his own play based on Primo Levi's This was a Man. Following his debut as a writer with Year of the King, he has written four novels - Middlepost, Indoor Boy, Cheap Lives and The Feast - as well as an autobiography, Beside Myself (2001), and a play, I.D. (premiered at the Almeida, 2003). Show Less

About Sher, Antony
Antony Sher was born in South Africa and shot to fame as an actor for the Richard III that is the subject of this book. Other roles at the RSC include the Fool to Michael Gambon's Lear, Tamburlaine, Cyrano, Macbeth (with Harriet Walter) and, this year, Iago. He has published three novels, a book of his paintings and drawings and ... Read morean autobiography, Beside Myself (Hutchinson 2001). His first play, I.D., premiered at the Almeida in 2003 with Sher in the lead. He was knighted in 2000. Show Less

Reviews for Year of the King
'One of the finest books I have ever read on the process of acting' Time Out; 'This is a most wonderfully authentic account of the experience of creating a performance' Sunday Times; 'A brilliant compulsive account' Michael Billington, Guardian; 'It is very funny... The drawings are miraculous too. Is there no end to the man's talent, damn him?' Evening Standard ... Read moreShow Less

Goodreads reviews for Year of the King