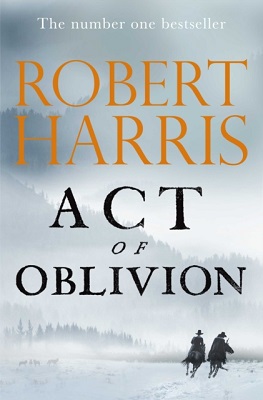 Description for Act of Oblivion Hardcover.
FROM THE SUNDAY TIMES NUMBER ONE BESTSELLING AUTHOR 'His best since Fatherland' The Times 'A master storyteller' Observer 'An important book for our particular historical moment' Guardian 'From what is it they flee?' He took a while to reply. By the time he spoke the men had gone inside. He said quietly, 'They killed the King.' 1660. Colonel Edward Whalley and his son-in-law, Colonel William Goffe, cross the Atlantic. They are on the run and wanted for the murder of Charles I. ... Read moreUnder the provisions of the Act of Oblivion, they have been found guilty in absentia of high treason. In London, Richard Nayler, secretary of the regicide committee of the Privy Council, is tasked with tracking down the fugitives. He'll stop at nothing until the two men are brought to justice. A reward hangs over their heads - for their capture, dead or alive. Act of Oblivion is an epic journey across continents, and a chase like no other. It is the thrilling new novel by Robert Harris. 'The king of the page-turning thriller' i Paper 'Harris's cleverness, judgment and eye for detail are second to none' Sunday Times 'Harris writes with a skill and ingenuity that few other novelists can match' Financial Times 'Harris is a master of historical fiction, a compelling author who brings to life the recent and ancient past' TLS Show Less

About Robert Harris
Robert Harris is the author of fifteen bestselling novels: the Cicero Trilogy - Imperium, Lustrum and Dictator - Fatherland, Enigma, Archangel, Pompeii, The Ghost, The Fear Index, An Officer and a Spy, which won four prizes including the Walter Scott Prize for Historical Fiction, Conclave, Munich, The Second Sleep, V2 and Act of Oblivion. His work has been translated into ... Read moreforty languages and he is a Fellow of the Royal Society of Literature. He lives in West Berkshire with his wife, Gill Hornby. Show Less

Reviews for Act of Oblivion
One of Harris's most compellingly paced to date . . . it is his best since Fatherland
Sunday Times
Act of Oblivion is a belter of a thriller. It will be compulsive reading for those who loved An Officer and a Spy, Harris's book about the Dreyfus affair. Like that novel, the research is immaculate. A chewy, morally ... Read moremurky slice of history is made into a thriller that twists and surprises. The characters are strong and we care about their predicament. The story stretches over continents and years, but the suspense feels as taut as if the three main characters were locked in a room with a gun.
The Times
Act of Oblivion is a fine novel about a divided nation, about invisible wounds that heal slower than visible ones . . . it feels like an important book for our particular historical moment, one that shows the power of forgiveness and the intolerable burden of long-held grudges
Observer
Harris's books are always supremely readable - he has practically trademarked the term 'master storyteller'
Alex Preston
Observer
[Harris] writes with a skill and ingenuity that few other novelists can match
Financial Times
A lightning-quick thriller, the tension cranked right up throughout, and Harris' 17th century New England is so real you can almost smell it
Tim Weaver, author of BLACKBIRD Harris (Munich) again turns a historical event into a canny page-turner. . . Harris humanizes the hunter and the hunted, and brings to life an obscure chapter in colonial American history. This further burnishes Harris's reputation as a talented author of historical suspense
Publishers Weekly
Gripping . . . Thoroughly enjoyable. . . . [This} deeply researched story is the author's brilliant reimagining of real historical events, with sympathetic characters and a compelling plot
Kirkus Reviews
Harris's cleverness, judgment and eye for detail are second to none
Dominic Sandbrook
Sunday Times
The master of the intelligent thriller
Daily Telegraph
I have been waiting for most of my life for Robert Harris to write a novel that is not gripping, insightful and entertaining. I am waiting still
Ben Macintyre
The Times
The king of the page-turning thriller
i Paper
Harris is a master of historical fiction, a compelling author who brings to life the recent and ancient past
Justin Warshaw
TLS
Act Of Oblivion offers a resonant history of both England and America as they struggle to forge a myth of nationhood out of opposing ideologies
Daily Mail
The joy is in the vivid re-creation of 17th Century England and America and in the sly parallels with today that Harris teases out
Mail on Sunday
He has taken a truly extraordinary factual tale and turned it into a fun fictional version, with pace throughout, and a crowd-pleasing finale
The Oldie
A masterclass in storytelling, so enthralling that if you'd disembowelled me whilst I was reading this book I doubt I'd have noticed!
Daily Express
A tale that grips from start to finish. It's a remarkable achievement
Metro
Master storyteller Robert Harris has forged history anew, melding fact and fiction
RTE
Harris spins an exciting tale which I hope will leave you hungry for more
Inside History Magazine
If you like your page-turning popular fiction at the more intelligent end of the spectrum, you could not do better than this.
Daily Telegraph
A gripping thriller
Press Association
A gripping revenger's tale... This is by far Harris's best book since An Officer and a Spy, which dealt with another great national division: the Dreyfus case. He has produced a ripping page-turner that breathes all the complexities and moral nuances of the Civil War period
Financial Times
Lucid and full of suspense
Spectator
A thrilling page-turner based on real events . . . packed with rich and fascinating historical detail
The Scotsman
In his new thriller, Robert Harris wrests [a] fascinating period back from its unjust oblivion, showing how closely its complex landscape of constitutional crises and Puritan politics played out in new unregulated media resonates with us today
The Critic
Harris, deft as ever, weaves a hefty amount of historical fact into the narrative, politics, religion, colonial life, family ties - as well as themes of forgiveness and reconciliation. Underneath it all though is the remorseless and building propulsion of hunter and prey
New Statesman
A drama so involving and nerve-wracking, you can barely turn the pages fast enough. Historic!
Saga Magazine
Another fantastic piece of historical fiction from Robert Harris, immaculately researched and utterly believable
IPU Review
A gripping thriller and a timely reminder of the dangers of a deeply divided and intolerant society
The Shropshire Magazine
The book excels in its stunning recreation of the landscape of America... Harris proves himself to be masterful at this and it gives the book a vibrant memorability
New Statesman
Few writers combine history, politics and excitement of a thriller as enthrallingly as Robert Harris does.
Sunday Times
What Harris does here is nothing short of masterful.
Irish Times
Harris displays an impressive grasp of the historical context without taxing his readers by showing his 'workings'.
Church Times
Based on real and fascinating history, this is Robert Harris's best since An Officer and a Spy
The Times
Pacy and tense, and the pungently evoked past offers up some shrewd present-day parallels
Mail on Sunday
An absolutely stunning historical novel and a ripping crime thriller at the same time. I've been recommending it far and wide and buying it for people for Christmas!
Dead Good
The best historical fiction combines a gripping plot with meticulous research - leaving the reader inspired to learn more about the real-life protagonists. And the latest release from Robert Harris once more proves his mastery of the genre
Soldier
I loved Act of Oblivion by Robert Harris, which achieves the astonishing feat of taking 17th-century events and people and telling their stories in 21st-century language without a single seam showing
Ben Macintyre
The Times
Show Less

Goodreads reviews for Act of Oblivion