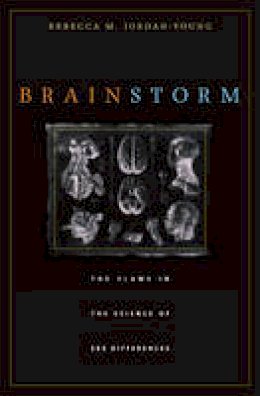 About Jordan-Young, Rebecca M.
Rebecca M. Jordan-Young is a sociomedical scientist and Tow Associate Professor for Distinguished Scholars in the Department of Women's, Gender, and Sexuality Studies at Barnard College, Columbia University.

Reviews for Brain Storm
Jordan-Young has written a stunning book that demolishes most of the science associated with the dominant paradigm of the development of sex and gender identity, behavior, and orientation. The current paradigm, brain organization theory, proposes: Because of early exposure to different sex hormones, males and females have different brains ; and these hormones also create gay and ... Read more straight brains. Jordan-Young interviewed virtually every major researcher in the field and reviewed hundreds of published scientific papers. Her conclusion: Brain organization theory is little more than an elaboration of longstanding folk tales about antagonistic male and female essences and how they connect to antagonistic male and female natures. She explains, in exquisite detail, the flaws in the underlying science, from experimental designs that make no statistical sense to conceptually sloppy definitions of male and female sexuality, contradictory results, and the social construction of normality. Her conclusion that the patterns we see are far more complicated than previously believed and due to a wider range of variables will shake up the research community and alter public perception. Publishers Weekly (starred review) 20100712 A carefully researched volume that exposes the problems with the widely accepted idea that gender differences are created by certain hormones in the womb.
Alex Spanko Boston Globe 20100921 What Jordan-Young's analysis uncovered is by turns fascinating and appalling...This book is not only a tonic, it's also full of scientific insights presented in plain, intelligent prose
an absorbing read, if you've ever wondered what was going on in the secret parts of your attic.
Sara Lippincott Los Angeles Times 20101003 It was with appreciation verging on glee that I read Barnard professor Rebecca Jordan-Young's devastatingly smart and definitive critique: Brain Storm: The Flaws in the Science of Sex Differences. Jordan-Young argues that the science of prenatal hormones, gender, and the mind better resembles a hodgepodge pile than a solid structure. And she knows of what she speaks. An expert on measures and study designs, Jordan-Young has spent the last 13 years combing the literature on brain organization, unpacking assumptions, questioning methods and statistical practices, holding one paper up against another. She stresses that fetal hormones must matter to the brain
somehow. But after picking apart more than 400 studies that try to understand the genesis of particular psychological sex differences (real or supposed), she concludes that fetal T looks like an awfully anemic explanation...After decades of determined research, if robust links between prenatal hormones and male or female minds really exist, shouldn't we see those links across lots of different kinds of studies? This matters because the obsession with prenatal T can easily become a distraction. It can make us forget how much gender norms have changed
think of all those female accountants, lawyers, and doctors who weren't around 50 or even 30 years ago
and how remarkably similar men's and women's brains and minds actually are. All this unwarranted hammering away at difference (and its putative explanations) causes real trouble, too. As a growing body of research shows, cues that foreground gender and bring stereotypes to mind can dampen men's performance on tests of social sensitivity, women's scores on math tests, and women's stated interest in quantitative pursuits. Jordan-Young has done an enormous amount of work to untangle the gender claims. We ought to read her, cite her, thank her. And then, let's move on.
Amanda Schaffer Slate 20101021 Jordan-Young ferret[s] out exaggerated, unreplicated claims and other silliness regarding research on sex differences. The book [is] strongest in exposing research conclusions that are closer to fiction than science.
Diane F. Halpern Science 20101203 Exhaustively analyses every relevant study on hormonal sex differentiation of the human brain, and argues that they are riddled with weaknesses, inconsistencies and ambiguity. It's a clarion call for better science on the subject.
Madeleine Bunting The Guardian 20101114 In her exhaustive survey of the literature, Jordan-Young discovers a hodge-podge of tiny samples, inadequate controls, conflicting data and extravagant conclusions...By meticulously revealing the flawed research behind brain organization theory, she opens the way to a non-hierarchical study of sex difference that will be both more fruitful for science and less damaging for society.
Hilary Rose and Steven Rose London Review of Books 20110428 Jordan-Young's detailed and exhaustive critique of brain organization research is quite welcome.
Vernon Rosario Gay and Lesbian Review 20110701 Show Less