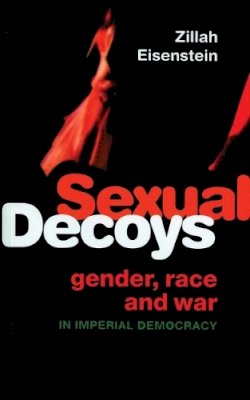 About Zillah Eisenstein
Zillah Eisenstein is one of the foremost political theorists and activists of our time and Professor of Politics at Ithaca College in New York. She has written feminist theory in North America for the past twenty-five years. Her writing is an integral part of her political activism. She is the author of Against Empire (Zed 2004), ... Read moreHatreds: Racialised and Sexualised Conflicts in the 21st Century (1996), Global Obscenities (1998) and ManMade Breast Cancers (2001). Show Less

Reviews for Sexual Decoys: Gender, Race and War in Imperial Democracy
'In Sexual Decoys once again, Eisenstein brilliantly draws us into the profoundly complex gendered politics of war, mobilizing startling constructs like sexual decoys, patriarchal imperialism, neoliberal feminism, and racialized fascist democracy to sharpen our analytic feminist lenses and demystify war cultures. A smart, challenging book for everyone concerned with what it means to live ethically and accountably in the USA ... Read moreof the present.' Chandra Talpade Mohanty, Syracuse University 'In Sexual Decoys, Eisenstein has written a passionate and exhaustively detailed indictment of the anti-woman crimes of USA imperialist aggression.' Minnie Bruce Pratt, Poet-activist 'Zillah Eisenstein's Sexual Decoys is an incisive critique of the right-wing mobilization of gender and race for imperial designs.' Ella Shohat, New York University 'Zillah Eisenstein's latest feminist text is a provocative, insightful reading of the gendered and racialized complexities of the wars in Afganistan and Iraq and the ways in which the metaphor of sexual and racial decoys can be deployed to illuminate contemporary US government machinations here and around the globe.' Beverly Guy-Sheftall, Spelman College 'Zillah Eisenstein has won deserved praise for her trenchant indictments of gender and political issues. Her latest book tackles both of these topics head-on.' The New Statesman 'Raises provocative questions ... Smart and witty, sobering yet uplifting, this book is essential reading for all of us committed to social justice.' Ms Magazine '...reveals a wonderful and passionate account of US imperialist exploitation of gender and race for its own political and military purposes at home and across the globe.' Patricia d'Ardenne, Chartist 'A vivid, comprehensive, and compelling account of the day-to-day efforts of women peace-builders and leaves the reader enlightened and enriched.' Gender and Development Show Less