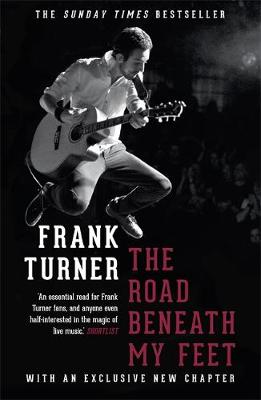 The Road Beneath My Feet

Description for The Road Beneath My Feet Paperback. A searingly honest and brilliantly written account of Frank Turner's journey from the pub circuit to selling out Wembley Arena, with an exclusive new chapter. Num Pages: 336 pages. BIC Classification: AVGH; AVGU; AVH; BGFA. Category: (G) General (US: Trade). Dimension: 130 x 198 x 23. Weight in Grams: 268.
*The Sunday Times Bestseller* *Featuring an exclusive new chapter* On 23 September, 2005, at the Joiners Arms in Southampton, Frank Turner played his last gig with his hardcore band, Million Dead. On the laminates that listed the tour dates, the entry for 24 September simply read: 'Get a job.' Deflated, jaded and hungover, Frank returned to his hometown of Winchester without a plan for the future. All he knew was that he wanted to keep playing music. Cut to 13 April 2012, over a thousand shows later (show 1,216 to ... Read morebe precise), and he was headlining a sold-out gig at Wembley Arena with his band The Sleeping Souls. Told through his tour reminiscences, this is the blisteringly honest story of Frank's career from drug-fuelled house parties and the grimy club scene to filling out arenas, fans roaring every word back at him. But more than that, it is an intimate account of what it's like to spend your life constantly on the road, sleeping on floors, invariably jetlagged, all for the love of playing live music. Show Less

About Frank Turner
Frank Turner is an English folk/punk singer-songwriter from Winchester. He was the lead singer of post-hardcore band Million Dead, before embarking on a solo career with his band The Sleeping Souls. Turner has released six solo albums as well as EPs and rarities, and has played thousands of shows across 38 countries. He sometimes lives ... Read morein London, but mostly on the road. Show Less

Reviews for The Road Beneath My Feet
An essential read for Frank Turner and Million Dead fans, and anyone even half-interested in the magic of live music.
Shortlist

Goodreads reviews for The Road Beneath My Feet